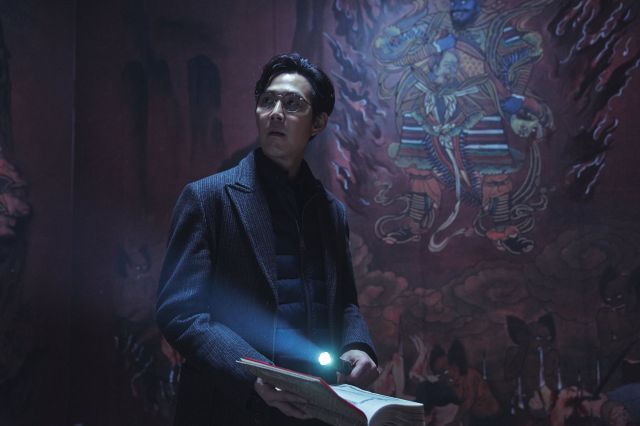 Throughout a fairly disturbing opening sequence writer/director Jang Jae-hyeon show us the everyday life of Geum-hwa (played by Lee Jae-in), a teenage girl living in the centrally located rural county of Yeongwol. In Geum-hwa's life there are cults, suicide, sickness, shamans, that creepy thing that lives behind a door in the kennels. In one graphic moment we even see Geum-hwa's leg chomped at in utero. It's pretty freaky stuff.

Then we switch over to Pastor Park (played by Lee Jung-jae), who's investigating a deer cult that has some oblique relationship with all that. Eagle-eyed observers may note that, at no point in "Svaha: The Sixth Finger" do Pastor Park and Geum-hwa actually meet. In fact, Pastor Park doesn't really do much of anything except follow people around and bug them for mystical exposition about the supernatural background of the story.

I thought that was a rather questionable screenwriting decision. In Jang Jae-hyeon's first film "The Priests" we were given characters, promised an exorcism, and then most of the movie was just watching the characters perform an exorcism. In "Svaha: The Sixth Finger" the exact point of anything that happens is kept frustratingly vague. There's this subplot about random teenage girls getting abducted, but most of the characters are oddly disinterested in this, even the guy who kidnaps them. A large police squad present early on disappears after only a few scenes.

Everything is tied together eventually, but until that happens the movie tries to do way too much. Odd details are thrown in as an afterthought. At one point an elephant gets shot in a room. How the elephant got into the room we'll never know. It's only in the movie to briefly make eye contact. I do appreciate the irony of there being a literal elephant in the room after so many metaphorical elephants in the room, although I doubt this irony was intentional.

My favorite elephant in that regard was the small room with the terrifying Buddhist artwork. Apparently someone sleeps in there, and we even get to see what that experience is like. It's not fun. "Svaha: The Sixth Finger" can be pretty terrifying when we get breaks from the exposition, with its haunted glimpses of the afterlife. Or maybe I should call it the beforelife. "Svaha: The Sixth Finger" gets pretty deep into reincarnation and immortality, and how struggling against the holy forces of nature can really do a number on a person's soul.

Which person? Well uh...yeah, there's the problem. Most of the screentime is centered around Pastor Park, who doesn't do anything. He's not even around during the climax. So what we're left with is an ending and payoff centered around characters we really don't know that much about. Maybe for you freaky imagery alone is enough to carry the day. Maybe the multifaith discussions of spirutality in the context of hellish nightmares is all you need for intellectual stimulation. But for me, personally, I was hoping for a story to connect all this crazy stuff together, and I never got one.