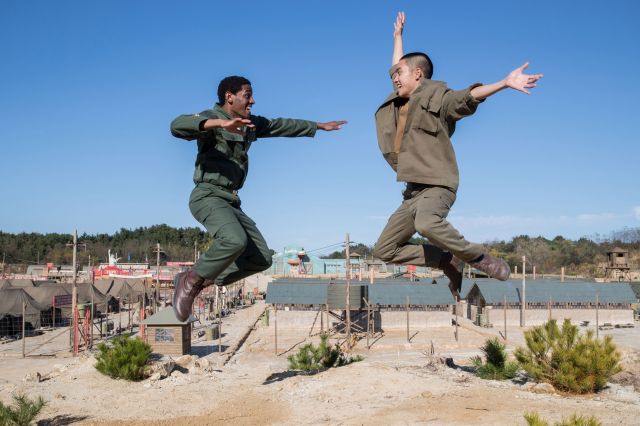 At the Geoje Prison Camp during the Korean War Gi-soo (played by Do Kyung-soo) is a North Korean Communist who actively resists against the American invaders of his country. "Swing Kids" never actually explains that this is why Gi-soo is such a hardcore partisan, instead going into how he is moved by the inherently inspiring nature of swing dancing. If you think that's bad wait until you get to Pan-rae (played by Park Hye-soo), whose material concerns of providing food for her orphaned siblings are also sidelined by the inherently inspiring nature of swing dancing.

Further confusing the narrative thrust is the fact that neither Gi-soo nor Pan-rae are the perspective characters in "Swing Kids" as that role instead falls to Jackson (played by Jared Grimes), a black American sergeant in the only recently integrated American military. For awhile Jackson was my favorite character. He's in a constant state of moderate irritation because superior officers are giving him bizarre, impossible tasks in an explicitly racist work environment. Then Jackson finds friends, through the inherently inspiring nature of swing dancing.

Are you seeing a pattern yet? Anytime "Swing Kids" is close to something resembling an interesting commentary on what life was like for people in or around the Geoje Prison Camp, someway, somehow, a strange excuse is contrived to provoke an elaborate setpiece involving swing music and swing dancing. An entire posse of trained orchestral musicians can be relied on to pop up out of nowhere as necessary to provide accompaniment.

As an utterly preposterous gimmick film, "Swing Kids" works fairly well. I'm always open to new ideas- in theory anyway. In practice, though, "Swing Kids" manages to double as pretentious by being just barely realistic enough so as to be uncanny. Consider how food scarcity factors into the plot. As in, food is so hard to come by that women are prostituting themselves. And no, I'm not referring to Pan-rae's introduction where she spends an entire swing music party eyeing a plentiful table full of snacks. Later another woman is fairly clearly implied to literally be prostituting herself.

That kind of thing happens a lot in this movie. Not satisifed with merely obliquely referencing death and destruction just off-screen, writer/director Kang Hyeon-cheol will abruptly ratchet up the intensity setting only to shortly thereafter forcibly pacify it by using, you guessed it, the inherently inspiring nature of swing music. "Swing Kids" is less a coherent movie in this regard than it is over two hours worth of comedy skits where the punchline is always that swing music is the solution to all of life's problems.

I'm sure some people will find this entire idea so delightfully absurd as to warrant a big sincere laugh every five minutes, which is about how long it takes "Swing Kids" to get from one moment of physical comedy to the next. But however I look at "Swing Kids" the whole concept is just too ridiculous. The movie's anti-ideological message is completely undermined by its own ideological message about the inherently inspiring nature of swing music.