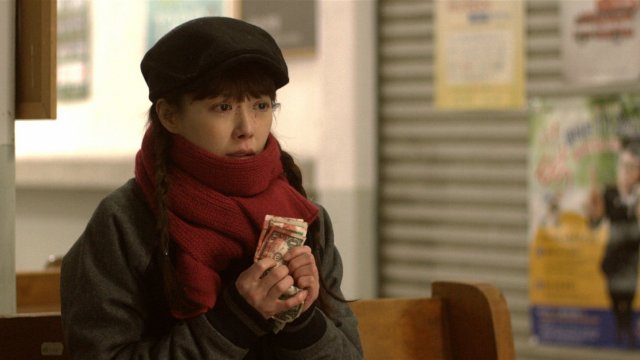 The dark animation that starts out "Sword of Sarasen" details how in order to guarantee passage through the desert, some traders are known to kill a camel calf right in front of the mother's eyes. Supposedly a mother camel will then take them to safety to insure a proper burial. While attempting to research this legend I learned that apparently camel meat is delicious, casting doubts on some assumptions of the story.

None of this has much to do with the actual plot of "Sword of Sarasen" aside from it working as a somewhat convoluted metaphor. We do get lots of flashbacks with Yoon-ah (played by Shin Ji-soo) as a young girl having an often pained relationship with her mother (played by Park Myung-shin). But in the present day Yoon-ah just works at the glass factory, where exploitation of both the labor and sexual varieties occurs in very realistic measure.

Given how "Sword of Sarasen" is framed by the camel story and the ultimate dark turns the narrative takes with the sword always being a background element, this realism surprised me. With Yoon-ah, her foreign-born co-worker Alan (played by Gambhir Man Shrestha), and foreign-descended accountant Eun-ji (played by Sung Hwa-yeon), they are all worn down by bullying and the belief in the mastery of their employers. Worker solidarity is nonexistent at the glass factory, so they live lives without hope.

That sentence is rather more literally accurate than I would have liked. While I was expecting that over time Yoon-ah, Alan, and Eun-ji would get to know each other better and maybe make some attempt to discuss their problems, that never really happens. They just watch one another get brutalized. Their stories just persist in a dreamy haze of sadness- which proves oddly fitting as Yoon-ah, our alleged lead character, is too wrapped up in her flashbacks to really understand what's going on at the factory.

Really, there's so much focus on the past tense relationship between Yoon-ah and her mother I often found myself wondering what the other characters were doing in the movie at all. By all rights Alan and Eun-ji should be the actual leads here. They're the characters in the most need of motivation. Why don't they just leave? I can think of plenty of good reasons but the apparent unwillingness of "Sword of Sarasen" to offer any textual ones just makes them feel like an afterthought.

Yoon-ah herself only really has enough personal narrative for a short film at best, the result bieng that "Sword of Sarasen" meanders quite a bit before falling into a brutal climax that ended so quickly I was convinced that I'd missed something. The most charitable endorsement I can given "Sword of Sarasen" is that it's a decent depiction of how a person can mentally snap seemingly out of nowhere. But as a story with actual narrative logic as opposed to just dream logic there's just not much here.