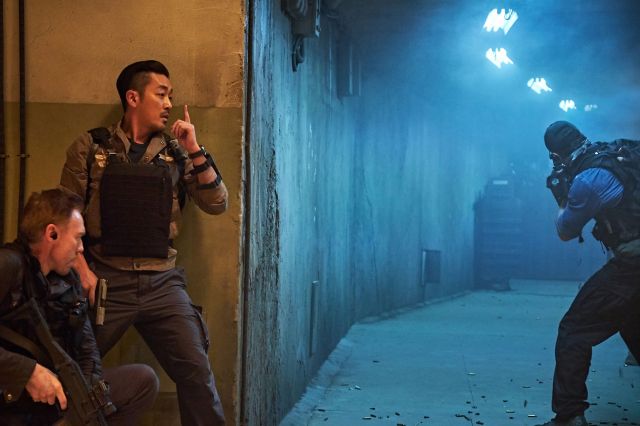 In a delightfully cynical opening montage writer/director Kim Byeong-woo shows us how even in its most magnaminous moments, the United States is a comically fickle country whose leaders will sabotage long term peace deals in the name of dubious short term objectives. By the time we get to mercenary captain Ahab (played by Ha Jung-woo) we find out that the glue holding his team together is economic poverty and an absence of proper paperwork to live in the land of opportunity. So it is that they took on a high profile job...in the bunker.

From a production standpoint writer/director Kim Hyeong-woo films "Take Point" in much the same style that he did "The Terror Live" with events flowing in real time. Long shots are the norm here, and they constantly shake from the frequent explosions. Hilariously enough, Ahab himself spends most of the movie stuck in a single room thanks to his bum robotic leg, helplessly trying to keep track of all his men while also coordinating with CIA liason Mac (played by Jennifer Ehle) who is both untrustworthy and a terrible liar.

In stark contrast to more optimistic films like "Steel Rain" which demonstrate fundamental trust in the competence of high-ranking personnel in the American security apparatus, Mac's competence is constantly questioned. Mainly this is just because she is almost always wrong about everything that's happening. Even the final explanation we get for how the Chinese are the real villains is terribly unconvincing- not that this matters to Ahab, whose concerns are immediate and practical, and not very concerned with political gamesmanship.

Curiously enough, for a team of professional killers, we almost never really see Ahab's team kill anyone. All the action is filmed through shaky, grainy cameras, in tight corridors where no one can really see where they're shooting and everything is incredibly loud. It's often hard to tell what's going on- making for a very effective reenactment of an actual war zone, where the emphasis is more on survival than keeping track of who got what kill.

This is all fairly terrifying stuff. The entire team, Ahab included, is totally expendable. Everybody knows this, and in the very first action sequence there's a ridiculously long prelude where Ahab tries and mostly fails to hype everybody into busting down the first door with gusto. Conversations about death are very serious and practical, and ethical life and death decision making is frequently rendered a moot point by yet another off-screen explosion by some new manner of death machine.

"Take Point" is brilliant work that, far from romanticizing the work of private military contractors normalizes it as just a very bad job. Of course, real life private military contractors aren't like that at all, but that lapse is forgivable enough given the surprisingly relevant and timely take the movie has on American interests regarding North Korea. Much like Ahab himself, North Korea is a very abstract quantity here- a piece to be moved around the board with no regard to unintended consequences.