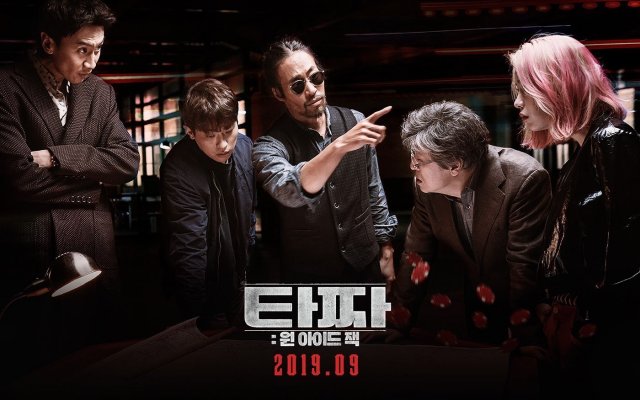 Il-chool (played by Park Jung-min) is a young man who's obsessed with the game of poker. For good reason- he's pretty good at it and makes decent money there. At the very least, he can hustle a small table of other players. In the most striking scene of "Tazza: One Eyed Jack" we see Il-chool in a crowded study hall struggling to concentrate on the extremely boring lecture to help him ace an equally boring test because the poker chips of fantasy are just too alluring.

Now, you might be thinking to yourself- really? The most striking scene of a movie about poker takes place in a classroom? And uh, yep, that's where we get to the main problem. "Tazza: One Eyed Jack" is surprisingly long-winded and dull. The movie spends an excessive amount of effort going over every minor detail of its very complicated scenes. The trouble is, none of the scams that Il-chool and his gang pull are really all that clever. What's worse, they work and fail in predictable patterns for no obvious reason.

By the time "Tazza: One Eyed Jack" gets around to explaining whatever was going on two plot twists ago I'd already lost interest. That's how much this movie plods. The climax tries to spice this up as we're exposed to increasingly gruesome and violent setpieces but that just called more attention to the fact that all of the action is centered around unnecessarily high stakes poker games where people can easiily cheat. There is no enforcement mechanism against cheating, and how much anyone cares about cheating differs quite a lot on a scene by scene basis.

I should probably mention that Il-chool isn't actually the main character anyway. That roles goes to Ae-ggoo (played by Ryoo Seung-bum), the mysterious mentor figure who brings the gang together for reasons that...kind of make sense, when he finally explains them. But then, that's another big problem I had with the movie. Characters withhold information from each other for no good reason. It's a cheap trick of about the same quality as hiding poker cards up your sleeve which incidentally is about the highest level of sophistication these plans ever get to.

Irritatingly most of the characters do have reasonably interesting personality traits but instead of getting bantery fun scenes where we learn more about them director Kwon Oh-kwang just keeps pushing endless exposition of all these plans and plot twists. In the single most frustrating moment, Il-chool disposes of the final villain thanks to a personality trait we had seen the villain express in exactly one scene.

The character in question had plenty of screentime. The problem is that he's always just being moved around as a piece in the plans instead of having a personality. All the characters are treated like this such that they all feel obnoxiously underdeveloped even though the movie is quite long. There's so little variation on a scene by scene basis that even this review keeps lapsing into annoying reptition. "Tazza: One Eyed Jack" is just not worth your time at all.