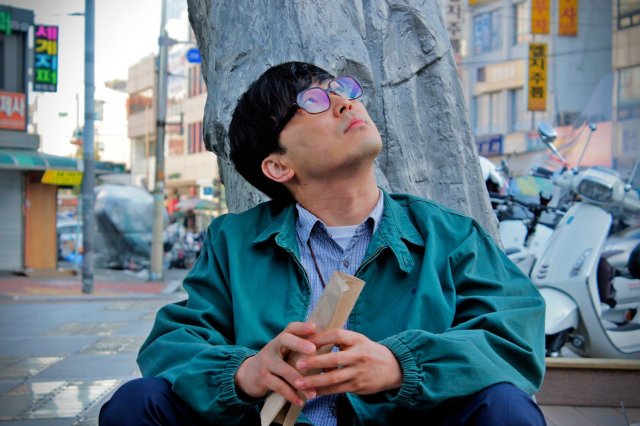 As "Teuri" opens up we see Crayon (played by Seo Hyun-woo) find several letters addressed to acquaintances from his high school days. As Crayon uses the letters as a pretext to go see these people again, a pattern plays out. They are warm and welcome, filled with nostalgic feeling upon the reminder of their past. Then they actually read their individual letter, and the mood turns dark and angry. They express agitation at Crayon, who seems blissfully unaware of the seriousness of the moment.

"Teuri" is the story of why Crayon has this oddly disaffected attitude when it comes to the obviously serious nature of the letters. It took me way, way too long to figure this out though, because Crayon's role in the story is so understated. He is for all practical intents and purposes just tagging along, barely even paying attention to ongoing revelations. Crayon is just so dialed into the current atmosphere he lets the more ominous subtext of the moment slip by

Consequently the movie's most distinctive moments all take place in flashback, as we slowly get some clues as to what exactly happened back then to cause so much trouble. These flashbacks eventually build up into a terrifying climax, wherein the lead characters run afoul of criminal elements. From the beginning writer/director Inan interlaces just enough brutality to make it clear that the letters do not contain good news even before their contents are finally revealed.

But why does this movie even bother with the letters as a framing device at all? Well, again, counterintuitive as this may sound, it's because "Teuri" isn't really about its mystery but Crayon's psychological state. Unfortunately Crayon's psychological state is so out of focus it didn't occur to me to pay attention to it until his actual motivation is spelled out at the end. Appropriately, the other characters run afoul of the same issue.

Nevertheless "Teuri" is at a bit of a cross-purpose. The mystery is the most compelling part of the story, but it's not where the emotional build-up is. We learn more about the other characters than we do Crayon in flashbacks, so his perspective ultimately being the one that matters doesn't really sync up well with the story at large. Worse, Crayon's disaffected perspective also encourages the viewer to be disaffected, more focused on the milleu than the unfolding mystery.

I'm fairly confident looking back that was how I was supposed to view the noir backdrop. There just wasn't any real way for me to know that at the time, since the immediate textual focus is on the mystery. So "Teuri" is in a weird state overall. I didn't get much out of it, but only because I wasn't sure where to direct my attention. You might better understand it, though, since I've told you the part you should actually be paying attention to, even as the movie itself tries to distract your attention as a form of misdirection. It's all very tonally confusing, particularly considering how on paper at least the story is actually pretty straightforward.