[HanCinema's Film Review] "The ABCs of Our Relationship" 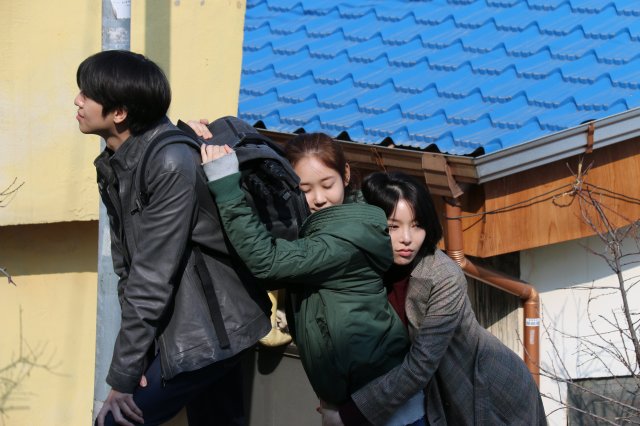 Of the six plot points juggled by "The ABCs of Our Relationship", only the on regarding South Korean adoption is given full exposition. Though she's not really the lead character, the adoption story centers around Joo-hee (played by Lee Seo-yoon), an ethnic Korean woman who was adopted in France back in 1997. Despite Joo-hee being the entire impetus for that plot, her character is surprisingly out of focus as the search for her birth mother takes on highly abstract dimensions.

Most of the scenes are quite literally just descriptions of South Korean adoption law, spoken in English as Joo-hee doesn't speak Korean. There's a decent joke or two in here about the irony of Joo-hee existing in a movie that for the most part is spoken in a language she doesn't understand, with Hannah (played by Oh Ha-nee) being her interpreter. Speaking of which Hannah is an ex-figure skater who recently quit.

It's not explicitly clear why, although I got the impression that Hannah finally decided she wasn't good enough to try and compete internationally. Hannah can speak English because she was living in Canada turning this time. Actually she was living in Quebec, which kind of begs the question why she doesn't speak to Joo-hee in French. I would have preferred that, if only because I rather liked Lee Seo-yoon's French accent but she doesn't have one when she speaks English.

You may have noticed I'm abruptly changing topics rather awkwardly in this review. Well, "The ABCs of Our Relationship" is written in a similar style, frequently transitioning to a different plotline with little warning or logic. So we have a documentary about adoption, another documentary about an old woman whose husband is on the wrong side of the DMZ, another documentary about a long-running high rise labor sit-in, the figure skating backstory, Hannah's romance with Min-gyoo (played by Eun Hae-seong), and the financial issues Min-gyoo and the other characters making the documentary are having when it comes to making documentaries in general.

These are a lot of storylines to juggle and most of them have almost nothing to do with each other save for sharing some of the same characters. Consequently none of them have a satisfying climax. The adoption story is the only one that even gets close. Yet rather incredibly, writer/director Lee In-eui simply omits the big dramatic scene. This is in spite of his having gone out of his way to set it up while simultaneously acknowledging its implausibility.

The great irony there is that more than really working as a movie, "The ABCs of Our Relationship" is focused on maintaining plausibility as a pseudo-documentary. And even then I found myself feeling skeptical fairly often. "The ABCs of Our Relationship" implies that South Korean privacy laws regarding adoption are unique, when in reality that's how they're written most places. Other such polemical moments feel similarly out of date, a mishmash of various adoption related talking points from the last twenty years. Consequently I often found myself just wishing I could be watching a real documentary instead while watching this movie.

"[HanCinema's Film Review] "The ABCs of Our Relationship""
by HanCinema is licensed under a Creative Commons Attribution-Share Alike 3.0 Unported License.