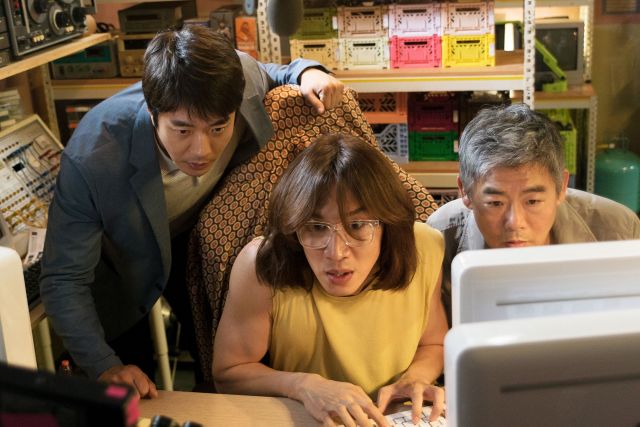 Right away "The Accidental Detective 2: In Action" gets on my good side by reminding us how working dad Dae-man (played by Kwon Sang-woo) and former cop Tae-soo (played by Sung Dong-il)...actually kind of suck at business management. Sure, in "Accidental Detective" these two managed to solve an exceptionally complicated and high profile case. But a lot of that was through dumb luck, and besides that, who can afford to hire private detectives in this economy?

That's the main effective charm the "Accidental Detective" franchise has going for it. This is a film series about relatively realistic detectives, who are prone to goofy mistakes and have money problems just like normal people. I especially liked the subplot about the comic book café from the first movie- a reminder that for a dorky regular guy like Dae-man who wants to be a detective, there really aren't very many jobs he can do that will take him any closer to that goal.

The mystery itself is, of course, convoluted in the way typical mystery potboilers always are. In fact the mystery is so convoluted I couldn't really figure out what the first fake solution was, and I only knew it was a fake solution because the story obviously wasn't going to wrap up at the seventy-five minute mark. A single deliberate shot of Son Dam-bi also makes it clear that the true solution must involve her character somehow, since she doesn't do anything of importance in her initial scene.

But the main fun stuff here is just watching Dae-man and Tae-soo stumble around incompetently, constantly reminding us that they are still very new at the whole private detective thing. They even have to go petition for help from Grasshopper (played by Lee Kwang-soo), a tech genius and general weirdo whose occasional moments of savant-like supercompetence only just barely outweigh his clumsy stupidity. Luckily, in the world of "The Accidental Detective 2: In Action" luck is a major factor in favor of the protagonists.

It also helps that the villains are in many cases just as clumsy and goofy as the heroes, even when their schemes are monstrously evil. The attempted kidnapping scene was another favorite of mine, since it resolves offscreen while we were just watching Dae-man nobly get the stuffing get kicked out of him. I also continue to enjoy any scene featuring Dae-man's wife Mi-ok (played by Seo Young-hee), because every time there's a domestic squabble, her opinion is always shown to be the correct one.

I mean granted, sure, we want Dae-man to follow his dreams. But we're also constantly left wondering whether Dae-man is actually any good at his stated dream profession. The guy's really bad at motorcycle chases, for example, yet still keeps trying to solve his problems by grabbing random motorcycles. Yes that's right, "The Accidental Detective 2: In Action" features multiple goofy motorcycle scenes that are distinguished mainly by all the unnecessary destruction Dae-man causes. That's the kind of comedy "The Accidental Detective 2: In Action" is- take it or leave it.

"[HanCinema's Film Review] "The Accidental Detective 2: In Action""
by HanCinema is licensed under a Creative Commons Attribution-Share Alike 3.0 Unported License.