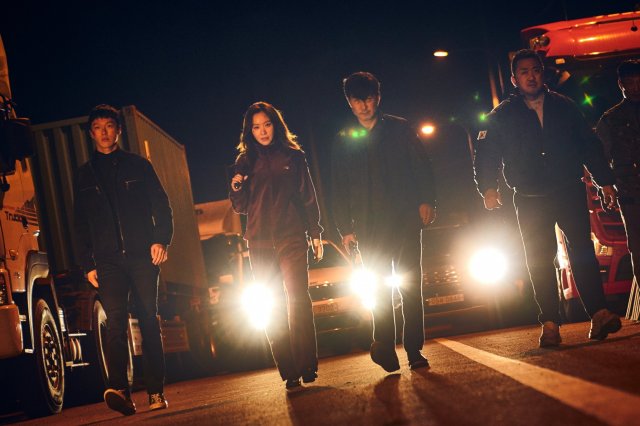 The title of "The Bad Guys: Reign of Chaos" is somewhat misleading. Without a doubt, the four principal characters are all extremely dangerous people who strike fear into the hearts of criminals everywhere. But in person, they're oddly aloof and charming. Woong-cheol (played by Ma Dong-seok) likes to sew. Goo-tak (played by Kim Sang-joong) exudes a fatherly air over the team. No-soon (played by Kim Ah-joong) has great social skills, which she mostly uses for scams. While Yoo-seong (played by Jang Ki-yong) likes to fight, even he can tell when he's outgunned.

Together they...investigate crime. Yes, intriguingly enough, even though "The Bad Guys: Reign of Chaos" bills itself as a movie about hardcore violence, at heart the story's a fairly straightforward investigative mystery. None of the four characters are all that good at interpreting clues. Their main technique to intimidate suspects with implied beatings should they prove uncooperative, and should that fail, they just try asking nicely.

This basic irony is the main joke repeated over and over again and while I would normally find that kind of repetition irritating, here it's surprisingly charming. Director Son Yong-ho is not afraid to break the tension in a scene via silly, absurd jokes. I especially liked the escape from the burning building, which is accomplished through clumsy yet highly satisfying brute force. This movie revels in simple solutions to ultimately simple problems and doesn't take these short term obstacles too seriously.

And when it gets to the action, well, that part's just plain top-notch. "The Bad Guys: Reign of Chaos" is among other things excellently paced. We get just enough bursts of energy from the leads in small doses to get a taste of what they're capable of when they really let loose. So it's very gratifying when we get to that point- and Ma Dong-seok quickly deduces that actually the giant gangster fortress might be a bit much for them to handle on their own so he calls in a favor from one of his old buddies.

"The Bad Guys: Reign of Chaos" also makes the most of its pedigree from the "Bad Guys" television show. This is not done through aggressive over-referencing. Rather, the point is made that these characters have their own lives and reputations. Consequently the world they live in feels fully realized, and nobody feels they need to get into overly complicated backstory. Information is perfunctory until the giant scam is fully explained, and the completeness of the explanation is mainly just there to make clear that the mystery is over. Now it's punching time.

More than the overarcing plot it's the little moments that make this movie. I loved the little annoyed grunts Ma Dong-seok makes every time he gets annoyed. In turn he is treated dismissively, with great horror, and as if he was trying to pick a fight. "The Bad Guys: Reign of Chaos" never goes any deeper than these genre beats but they are so solid and effectively done it's legitimately hard not to like this movie.