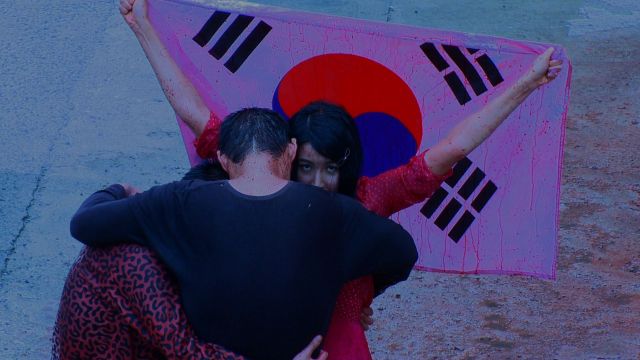 The time is May 18th, 1980. Following frustration over Chun Doo-hwan seizing control of South Korea in a military coup, a student protest in Gwangju quickly escalates into a full-scale uprising. Not just students but common citizens too ask themselves whether they should just accept the junta as a fact of life and keep their heads down, or find weapons and fight back. "The Battle of Gwangju" is a dramatization of a group of people who decide to fight back, eventually pushed back into a single critical building which they will inevitably lose.

In terms of structure "The Battle of Gwangju" bears more similarity to a stage play than a film. We don't observe characters so much as we observe concepts, and for good reason. By making the decision to resist against the South Korean Army, the characters give up their own identities. They know that failure means death, but are optimistic in the heat of the moment. Unfortunately, in real life determination doesn't equal victory- not against superior hardware and tactics.

Another major structural element is the obvious influence from experimental films. There are no guns. There's bloodspatter and gunshot, and plenty of miming for when such and such soldier is obviously brutalizing someone with the blunt end of his weapon. The question being asked of all this is, does the absence of guns make the experience any more sanitized and palatable? And the answer to that is, well, no, no it doesn't.

A more cynical question to ask might be- could the lack of guns actually be a statement on the lack of a significant operating budget? It's a derisive question but a fair one, and I can't really dispute the snide insinuation of the tone. If you watch movies to see grand events play out on a larger than life scale you're not getting that with "The Battle of Gwangju". There's no glorification and romanticization of courage here, or hand-wringing over evil. Just acted-out death.

Which is probably just as well. For most people the Gwangju Uprising is a footnote in a history textbook. Everybody acknowledges that Chun Doo-hwan was a very bad man, and the Gwangju Uprising is the most obvious explicit case of that. But what writer/director Lee Ji-sang is going for in "The Battle of Gwangju" is to paint the Gwangju Uprising as a serious pitched battle of brutality and limited colors where all of the actual participants were, in fact, just normal folks like you and me.

I would say he succeeded on that count. "Peppermint Candy" might have the big dramatic moment where the main character accidentally kills an innocent bystander, but "The Battle of Gwangju" more accurately notes that the Gwangju Uprising went on for a very long time, and that the brutality of the event was frightening precisely because it was so easily justified. Because let's just face it. If people are so desperate and angry that they're willing to pick a fight with the army, something is very rotten in the state of wherever.

"[HanCinema's Film Review] "The Battle of Gwangju""
by HanCinema is licensed under a Creative Commons Attribution-Share Alike 3.0 Unported License.