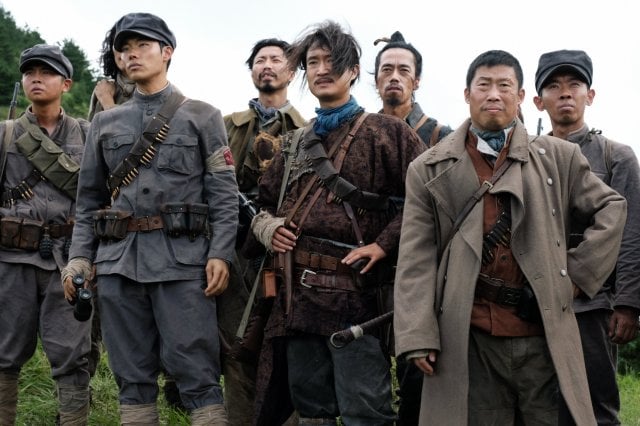 Promotional information for "The Battle: Roar to Victory" has been somewhat misleading. The movie does indeed contain the Battle of Fengwudong. There's even a subtitle that helpfully pops up to tell us that this particular random mountainous area the characters have just wandered is the one the movie's named after. But up until that point, the characters just wander into a wide variety of other generally random mountainous places getting into shootouts as necessary, nothing being that well organized. Because that is, in fact, the central defining element of guerrilla warfare.

"The Battle: Roar to Victory" is from a film perspective really weird to watch because it's basically an American Vietnam War movie in reverse. American Vietnam War movies, while generally acknowledging that war is bad, are deliberately vague as to the causes of the war and expect us to see uniformed American soldiers as inherently sympathetic boys from back home caught up in a situation they don't understand. And of course Vietcong soldiers are at best bloodthirsty jungle ninjas.

"The Battle: Roar to Victory" turns all those ideas upside down. Here, the uniformed Japanese soldiers are clearly, unambiguously the bad guys. They kill and rape for the fun of it. Anyone with the temerity to suggest that maybe killing and raping for fun is wrong is treated by commanding officers as if they just endorsed the concept of treason. It's disturbing, and maybe even a little cartoonish at times, but unfortunately far more accurate to real life than the troop fetishism common in American movies.

The Koreans, meanwhile, aren't even really soldiers. They don't have uniforms. Their main advantage is that they very vaguely know the layout of the countryside. Their leader Hwa-cheol is surprisingly well cast by the generally goofy Yoo Hae-jin. The fact that he, of all people, runs this ragtag band, emphasizes how the entire guerrilla rebellion against Japan is a very ad hoc operation and that their members consist entirely either of people who just had their homes destroyed or who have good reason to believe their homes are about to be destroyed.

The way they talk is also interesting- nobody ever says anything about Korea. It's always about their hometowns. It's never about the Japanese. It's about the invaders. "The Battle: Roar to Victory" does not deal with patriotism in the abstract but rather more immediate reasons why a person would give up their lives to face certain death at the hands of well-equipped career soldiers. Once you've robbed a man of everything, he's no longer in your power.

The main advantage "The Battle: Roar to Victory" has going for it is the surprisingly authentic take on the inherently tedious, meandering nature of guerrilla warfare. That also proves to be the movie's main flaw, since "The Battle: Roar to Victory" is itself very tedious and meandering. The movie needed better editing, as is well seen during the outrageous climax that somehow keeps failing to end. The battle scenes themselves are shot well enough- it just gets to be a bit repetitive after awhile.

"[HanCinema's Film Review] "The Battle: Roar to Victory""
by HanCinema is licensed under a Creative Commons Attribution-Share Alike 3.0 Unported License.