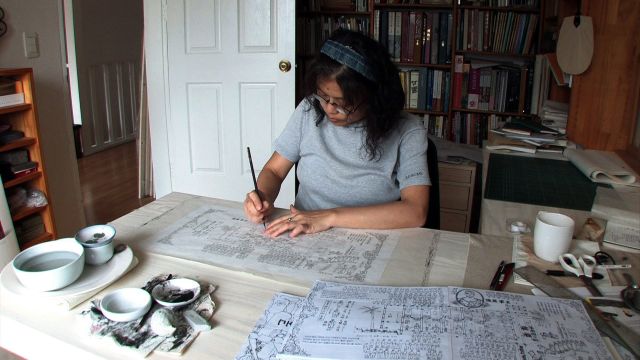 In 2007, Chinese, Japanese, and Korean picture book authors collaborated for a large project dedicated to exploring the concepts of war and peace. Kwon Yoon-duk's contribution to this project was a story called Flower Grandmother, which deals with an old woman who was forced to provide sexual services to Japanese soldiers in the days of the Japanese Empire. While most of the products of the peace project had an easy time getting published in all three member countries, Flower Grandmother stalls in the Japanese market, for reasons that are probably fairly obvious.

"The Big Picture" explores the background behind these struggles. Interestingly, the conflict over the potential publication of Flower Grandmother is not over nationalist lines- at least explicitly. The peace project was commissioned, after all, on the premise war is bad and Japanese complicity in war crimes is an obvious example of that. The concern ends up being on whether this particular subject matter goes too far.

"The Big Picture" presents a fairly even-handed debate between these points, even if director Kwon Hyo obviously believes that Flower Grandmother should be published in Japan, too. There's a balance to be struck. Yes, Japan should repent for past crimes, yet at the same time, telling sixth graders that their country has a legacy of wartime rape is a tough pill to swallow. No country likes exposing the skeletons in their closet even to older students.

Another important point of focus, though, is on Kwon Yoo-duk. The literal Korean title of "The Big Picture" translates to "what I want to draw", and what we see of Kwon Yoo-duk indicates that she is a quiet woman mainly accustomed to creative process rather than political thought. Her personality is marked by a curious lack of passion, which is why it's often hard to reconcile the political tenor of Flower Grandmother with its author, the subdued wanderer.

This all becomes quite logical when we see test phase results of Flower Grandmother, and especially when near the end, the story itself is narrated and shown page by page. Flower Grandmother isn't really a firebrand text. The imagery is not graphic- the worst (and also most striking) image is of two soldiers examining two girls, with a truck waiting nearby to spirit them away.

But that's enough. The kids get that- how the notion of arbitrarily being taken away from your home by a couple of men in uniform is a terrifying and horrible prospect. Thinking and discussing the potential negative implications takes the mind to some pretty dark places, yet even for a child this is all very perfectly relatable. In terms of what the peace project set out to do, Kwon Yoo-duk achieved her goals and delivered a timely, poignant story regarding the horrors of war that is nonetheless suitable for younger audiences.

And then politics gets in the way and...well, that much can't be helped. While "The Big Picture" is really more an exploration of the subtleties of the children's picture book publication industry than it really is involved with the comfort women issue, the subject matter is nonetheless engaging and sad enough to provide a useful starting point for discussion. The documentary is thus educational and worthwhile, much as the book it centers around.

"The Big Picture" is directed by Kwon Hyo and narrated by Kim Yeo-jin.