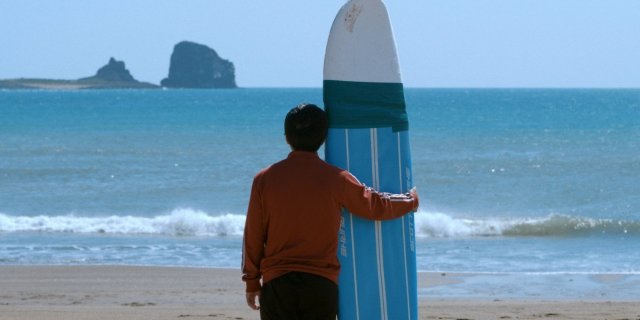 The title of "The Boy From Nowhere", as well as the script, frequently refers to lead character Kim Soo (played by Kwak Min-gyoo) as a kid. This is odd, and a frustrated Kim Soo comments on it as odd, because Kim Soo looks to be maybe thirty years old. But then, Kim Soo isn't exactly an adult. He rides around on his scooter-bike running errands in the illegal migrant trade, making little progress to any obvious goal in beautiful Jeju Island. So he instead decides to take up surfing.

The Korean title of "The Boy From Nowhere" is literally something like, the boy who rides the waves, and that's how this apparently incongruous transition is handled. Kim Soo himself is a product of wave riding, having in part an ethnic Chinese background. He assists migrants in securing work in South Korea, as they come to the country through whatever circumstance has led them to go overseas to seek their fortune.

And yet for someone with no prospects or responsibilities, Kim Soo comes off as surprisingly haggard. Having just been released from the criminal justice system onto probation, Kim Soo has simply gone back to the life he's always known because...well, because it's the life he's always known. And that's no way to live at all. Hence why he ends up taking up surfing. Because after all, that's a fairly obvious metaphor for his life trajectory. Kim Soo's trying to take control of a current over which he has no control. He's just riding along.

From a strict narrative perspective "The Boy From Nowhere" is technically a gangster movie, which is funny mainly because the whole situation is weirdly subdued. Kim Soo's boss Gap-bo (played by Kang Gil-woo) is not a particularly violent man. Indeed, the movie's only particularly violent scene of note is shocking mainly becomes it comes out of nowhere. The migrant trade is a business, after all, and it functions well in Jeju Island mainly because the tropical paradise is so sleepy that acts of extreme violence would likely be very quickly noticed.

The gangster half of "The Boy From Nowhere" is the only one with any real plot to speak of. The surfing half is more a travelogue than anything else...except that no one really goes anywhere new. It's always just the beach. "The Boy From Nowhere" depicts a simple, easy rhythm to life with minimum responsibility. Where another movie would show the surfers as slackers, writer/director Choi Chang-hwan-I posits their lifestyle as a viable alternative to work for the sake of work.

This is very appropriately demonstrated by the not particularly subtle means through which Gap-bo keeps Kim Soo as well as Kim Soo's best friend Pil-seong (played by Kim Hyun-mok) employed. There's interest payments, emotional manipulation and free dinners, but nothing all that impressive. When Hae-na (played by Kim Hae-na) calls out Gap-bo's obvious scam, there's barely even any serious acknowledgment of it. Because Kim Soo knew that all along. He just didn't want to think about it.

"[HanCinema's Film Review] "The Boy From Nowhere""
by HanCinema is licensed under a Creative Commons Attribution-Share Alike 3.0 Unported License.