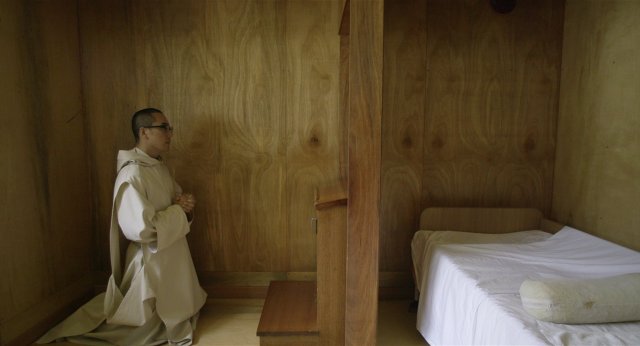 The Carthusians are an enclosed religious order of the Catholic Church. The most distinctive aspect of the Carthusians is that they take a vow of silence. Ironically enough, "The Carthusian Cloistered Monastery" depicts the monks speaking quite a bit, perhaps as a contrast to their normally quiet daily lives. The rules at the sole Carthusian monastery in Asia, more specifically in the Sangju district of South Korea, are a bit more lax than I was expecting.

Director Kim Dong-il-I is more about establishing the rhythm of life in this documentary than he is about explaining it. Nor do the monks seem that much more interested in discussing theology. The big highlight in terms of talking Carthusian monks is a pair of older European men who are allowed time every day to speak in Korean. Their performance in the language in one on one conversations is slow and stilted yet oddly thoughtful, even as they get into mundane subjects like the generally unpleasant nature of Korean mosquitoes.

There's also a Korean monk, who mostly only speaks in English but then we get a scene near the end where he's having a meal with his family. Well, not literally. He's only allowed to drink water. That's the rule, one of the few Carthusian roles we see explicitly vocalized. I found it interesting how apparently the vow of silence rules only apply inside the monastery itself. The walks throughout rural Sangju are fairly chatty, and left me wondering if the locals think it's odd or remarkable that they live next to a Catholic monastery.

The problem with these dialog-centric scenes is that they push the documentary's quiet scenes out of my memory, such that I can barely remember if there was anything particularly interesting or noteworthy about the various rituals we see on-screen. Although maybe I'm just such an obnoxiously wordy person in general I can't really notice them to begin with. I did think it was odd to see one monk reading verse with a side by side English and Korean translation, yet nothing in Latin.

I get the impression I may have been disappointed in "The Carthusian Cloistered Monastery" because I went into the movie with certain expectations. Apparently there's a German documentary, Into Great Silence, that's also about the Carthusians, that goes more into the spiritual dimensions of the order and opts to avoid any sound whatsoever. Such a mystical project unsurprisingly did well on the international festival circuit.

But as I think it over "The Carthusian Cloistered Monastery" is probably a more honest look at what day to day life is actually like for such monks. There's a distinct personal touch here, and even light comic relief, that really speaks to director Kim Dong-il-I sincerely liking his subjects, not as holy men so much as just regular men. There's an affability in the presentation here that I can't quite decide is a matter of Korean Catholicism being friendlier, or maybe just the church in general is a little friendlier since the ascension of Pope Francis.

"The Carthusian Cloistered Monastery" is directed by Kim Dong-il-I. Release date in Korea: 2020/11/19.