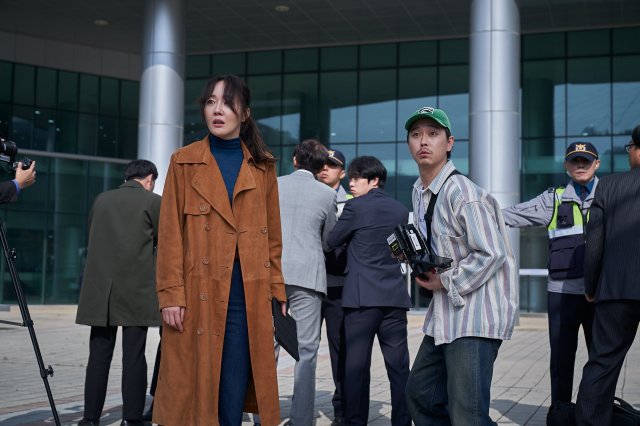 So I never saw "The Cursed" which aired on television early last year. If you're wondering whether that's really necessary to appreciate "The Cursed: Dead Man's Prey" I can assure you that yeah, it most definitely is. "The Cursed: Dead Man's Prey" does not, among other things, put any real effort into explaining who any of its characters are. When So-jin (played by Jung Ji-so) shows up in the latter portion of the movie it was fairly obvious that I as a viewer was just supposed to accept that she was some kind of wizard who knows spells relevant to the cursed undead monsters we'd seen up until then.

Technically her appearance in this movie at all is a spoiler, despite Jung Ji-so being given second billing. Initially we're just focused on investigative reporter Jin-hee (played by Uhm Ji-won) who is dragged into a seemingly unrelated murder incident presumably because it involves the same kind of cursed undead that "The Cursed" was known for. I'm making a lot of guesses here, since very little of the backstory is stated outright.

How relevant that backstory actually is I honestly have no idea. The plot, so far as I can tell, is that this corporation meddled in questionable scientific research regarding occult curses and are now being hounded by an inconsistently indestructible army. Sometimes guns are useful. Other times not so much. The more cursed undead there are in any given scene, the less powerful they are individually, is the closest thing I could find to a working framework of their abilities.

I also noted that indisputable proof of the existence of superpowered undead demons seems to have rather less influence on the world around them as I would have expected. By the time we get to the climax, the story's still centered around Jin-hee's plucky camera crew and the corporate executives behind an experiment obviously gone disastrously wrong. A scene defending the legality of this experiment comes off as just a bit farcical.

You'd think when literal monsters are running around murdering people in broad daylight the government might be a little less concerned with the letter rather than the spirit of the law. Speaking of which, all these monsters in broad daylight look just a tad ridiculous. I get that a big selling point of "The Cursed" is that its monsters are smarter than the average zombie, but when they're throwing cabbies out of taxis to engage in car chases...I mean come on. Read that sentence. It's absurd.

Director Kim Yong-wan appears to have gone nuts with the budget he was allotted for "The Cursed: Dead Man's Prey" without ever stopping to ask whether he should, just because he could. There's no real suspense or tension in this movie. There's only just barely the hint of a point, with a couple of post-credits scenes that appear to be tie-ins to "The Cursed Season 2" which still lacks a release date. "The Cursed: Dead Man's Prey" has not made be particularly enthusiastic about this upcoming television drama.