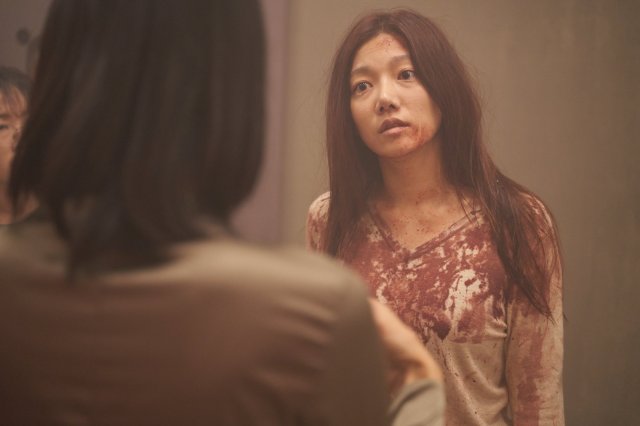 Strictly speaking "The Cursed Lesson" is a sequel to the 2009 horror movie "Yoga". This connection is made somewhat more obvious by the Korean title although really, the abstract idea of centering a horror movie around a mysterious yoga school is hardly that distinctive. And so unfolds a surprisingly clever metatext where horror movie conventions and even commentary about superficial beauty is turned on its head. "The Cursed Lesson" is not that kind of scary movie, although it's very good at pretending to be.

So anyway, in terms of plot, Hyo-jeong (played by Lee Chae-young) is a model with body image issues. It's implied that the main impetus is this jerk who gets her fired from a job because she doesn't match the company brand. But as we see in the privacy of her room, Hyo-jeong is on medication of some sort. And Hyo-jeong's awkward, stilted reactions with nearly everyone she meets give a clear impression of a woman whose mental issues more manifest in body image than were created by it.

Not coincidentally, a whole lot scenes just involve characters waking up. The bad/transcendent acting of the yoga school employees coupled with their obviously unsubtle attempts at gaslighting does a lot to mess around with Hyo-jeong's psyche. As a result, the ensuing scary scenes are legitimately frightening, not in terms of cheap jump scares, but in that we have huge stretches that just feel like we're watching the characters go on acid trips. It's not even always clear which character's on the acid trip and which one's watching.

All of this is framed by a related procedural mystery wherein a couple of detectives are trying to unravel the movie's shocking opening scene. The cops sort of drift away from the plot once weird stuff really starts happening on Hyo-jeong's end of the story, but there ends up being a very deliberate point to this. The already spooky and foreboding interior of the decrepit yoga school takes on increasingly horrific dimensions as Hyo-jeong's mental state starts to unravel. Never mind the cops, Hyo-jeong is losing touch with any kind of concrete reality whatsoever.

"The Cursed Lesson" is a very unapologetic bait and switch. The resolution ends up being far clumsier and stupid than you're probably expecting, to the point that even characters in story express clear disappointment with the ultimate turn of events. But I saw this as deliberate. "The Cursed Lesson" isn't about how snakes or ghosts are scary. It's about how we can talk ourselves into believing terrifying nonsense as an almost inevitable escalation of bad decisions.