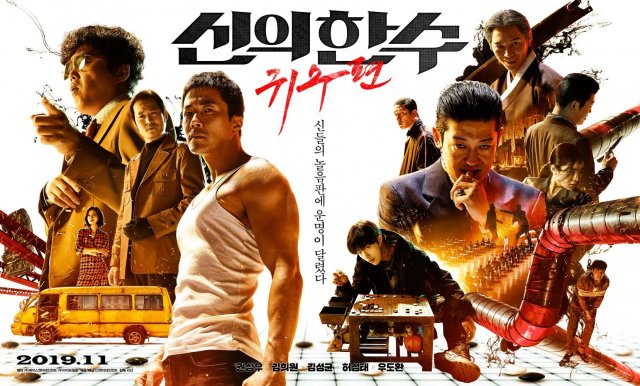 At first we simply watch young Gwi-soo (played by Park Sang-hoon-IV) go through a perverse and violent tragic story, eventually escaping to Seoul and undergoing bizarre monastic training for the sake of becoming a master of Baduk (Go) to obtain revenge. Yes, that's right, the board game played with black and white stones. Like "The Divine Move", "The Divine Move 2: The Wrathful" take a generally preposterous premise and plays it with the utmost sincerity.

Where "The Divine Move" bordered on self-parody with its absurd metaphors for Baduk as masculinity, "The Divine Move 2: The Wrathful" is sincere. Director Khan Lee depicts a surreal underworld where shamans, gangsters, and community leaders are obsessed with Baduk to the point that they're willing to risk death and dismemberment just to avoid acknowledging they might be less skilled than other players. As weird as this idea sounds in the abstract, in practice it's actually quite convincing.

The major reason for this is the movie's cinematography. So many of the shots here are of a calibre you'd expect to see in a film studies class. The dark, creepy lighting and the varied destructive backdrops communicate quite a bit about the psychosis of Gwi-soo and his various opponents who place more of their self-worth in the value of a board game than seems rational. All these people are insane, their obsession with Baduk a representation of their inability to find satisfaction in living normal lives.

Decreasing is not a typo by the way. A big part of what makes "The Divine Move 2: The Wrathful" so fascinating is that while the movie is frontloaded in terms of its setpieces, this is mainly symbolic of how Gwi-soo is coming across more superficially respectable opponents. As Gwi-soo's mentor Il-do (played by Kim Sung-kyun) explains it, everybody they fight in the game of Baduk is evil. It's just a matter of degree regarding who has been corrupted how much by what.

For an action crime film that just so happens to be centered around a board game this is surprisingly dark broad spectrum morality about the nature of human sinfulness. This is also forshadowed by Gwi-soo's mystical training for earthly purposes that ultimately has to be supplemented by hardcore physical training as well. There are a lot of layers here, right down to the layout of the Baduk boards, with surprisingly specific thematic messages.

"[HanCinema's Film Review] "The Divine Move 2: The Wrathful""
by HanCinema is licensed under a Creative Commons Attribution-Share Alike 3.0 Unported License.