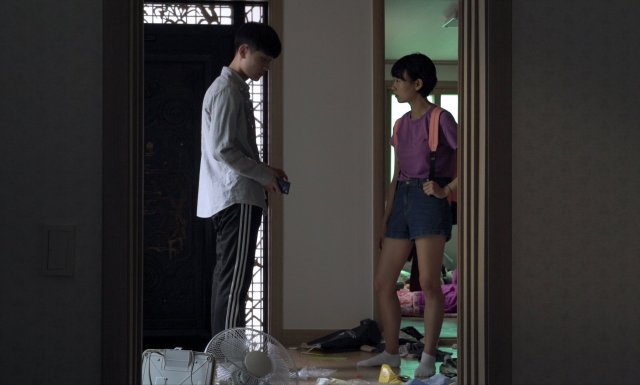 Seong-hee (played Moon Hye-in) is a cranky young woman who recently got injured on the job as a personal assistant. She isn't getting compensated because her job kind of sucks. Seong-hee begs an unsympathetic supervisor to give her just enough work so that she can limp into Spain and he acquiesces. Seong-hee's new low intensity job leads her to spend time with Hyeon-mok (played by Kim Joon-hyung-III), the teenage son of the borderline comatose woman Seong-hee ends up caring for.

The first thought that comes to mind regarding "The Education" is the movie's fairly cryptic title. Who's being educated? About what? The main engimatic irony of the film is that this is never clear. The main obvious person being intentionally educated is the viewer. "The Education" is a fairly blunt exposition of what being a personal assistant is like. The job is low paid, not terribly well respected, and the nature of the work is such that the person you're helping the most isn't even physically capable of saying thank you.

The more subtextual interpretation is about human relationships. Seong-hee is a very consistently unpleasant person, even bearing in mind that she has a pretty good excuse. But even with friends, or alleged friends, Seong-hee is just unavoidably crabby. We get the impression that she is suited for personal assistant work somewhat perversely because she hates talking to people, and the people she interacts with as part of her job usually can't.

Hyeon-mok does talk back to her, though, even if he probably shouldn't. We can see that Hyeon-mok is also worn down by having to balance school with work with dealing with his mom. So he too, doesn't really have any friends. Seong-hee is one of the few people he talks to on a regular basis, so it comes as little surprise that he's unintentionally rude. It comes off as even less of a surprise that Hyeon-mok starts to nurse a romantic crush on Seong-hee, with all the cute puppy dog telltale signs that implies.

The chemistry between Moon Hye-in and Kim Joon-hyung-III is both powerful and deeply uncomfortable. Seong-hee herself realizes this, and their relationship starts to straddle an uncomfortable line between her barking out orders and doing Hyeon-mok nice little favors. Seong-hee never stops being annoyed and bitter at the world yet weirdly enough her constantly frazzled demeanor is actually what makes her really cute. It's just that in a movie like this, that's not even slightly helpful to her.

Nor is it in real life really, which is the main strong point "The Education" has going for it. The ending is a wildly ambiguous moment of rage, yet also the closest thing possible to a happy ending because all the problems depicted are so permanent. Everyone still needs money, and they're still sick, and they're still busy, even if other people think they aren't just because they have some free time left in the day. What's worse, Seong-hee and Hyeon-mok can never really relax, because they know what will happen if they do.