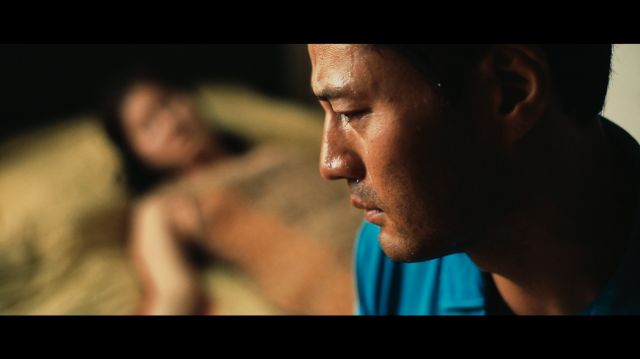 The Korean title of "The End" directly translates as the couple that lives in the forest. By choosing this very generic English title writer/director Jeon Kyu-hwan has made "The End" nearly impossible to search for. Then again the couple that lives in the forest doesn't even show up for over half an hour. The extended cold open is just an unrelated short film about Joo-hee (played by Lee Joo-hee-I) a college student who must resort to increasingly sordid activities in order to make rent.

The key word in that sentence is actually rent, not sordid. As much as writer/director Jeon Kyu-hwan may think he can titillate me with sex, drugs, and violence, I know what he's really after. "The End" is actually social commentary about how the rent is too damn high. Observe how the titular couple Seong-min (played by Kim Sung-min) and Geum-hee (played by Ji Sung-won) are camping out in the forest entirely because Seong-min lost his job.

So anyway, Joo-hee lives a hopeless, meaningless existence. Joo-hee doesn't even seem to believe the college degree she's working so hard for is even going to improve her life situation. Joo-hee further rejects money from her mom Min-young (played by Ahn Min-young-I) because...well it's kind of hard to tell because Joo-hee is very surly. Although really, it's hard to blame her for getting increasingly bitter and mean. It's not like she has anything to look forward to in life anymore.

The abstract break segueing Joo-hee's story into Seong-min's further emphasizes this. Did Seong-min think the labor union would save him? Well too bad. It didn't work. Also everyone hates him for being homeless now, especially Seong-min himself. It's really more a state of mind than anything else. Anyone who isn't sufficiently upbeat and apologetic must be homeless, or a deadbeat, or something bad. So it comes as little surprise that Seong-min finally snaps completely, albeit in a highly abstract and largely incomprehensible way.

I liked the direct social commentary more than the experimental stuff. The high school kids playing hooky in the forest are a lot of fun, because we can see them as earlier versions of Joo-hee. Which is to say, they'd rather hang out with their friends and enjoy doing generally stupid things than focus on long-term career goals that will probably only ever succeed in making them miserable and depressed. I also liked how the high school kids were portrayed with little romanticism. Riding a bike naked may sound cool in theory but...well actually it doesn't sound cool in theory either unless you're an idiot teenager.

All these interesting tidbits notwithstanding, I should warn you that "The End" is not a particularly watchable movie. The less impatient among you may be eyeing the time constantly, wondering when this extremely strange and pointless story is ever going to end. I think I like the film now more than when I was actually watching it. The literal plot points of the narrative are so utterly morose and weird it's hard to dislike them simply from a creative standpoint.