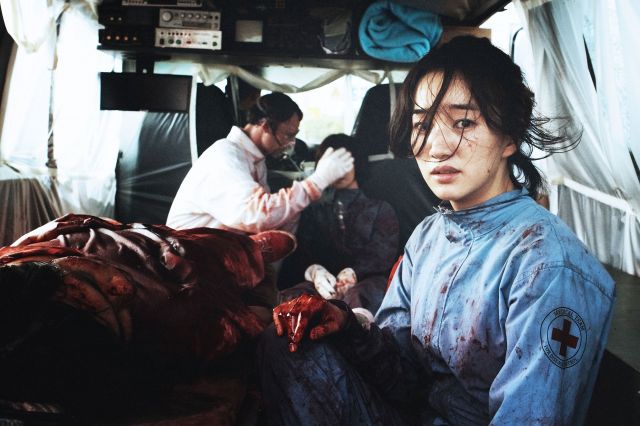 Ji-goo (played by Jang Hyuk) is a rescue worker obsessed with talking to and about women. His latest target is In-hae (played by Soo Ae), a divorced doctor who is doing some very important medical work of some kind but also has a daughter. This daughter, Mir (played by Park Min-ha) is an object that exists to get in trouble and create crisis. What these characters all have in common is that they are horribly obnoxious and unlikable.

I guess technically speaking they're also connected to "The Flu", a dangerous disease that soon gets out of hand in the city of Bundang. But, the only part I really noticed was how obnoxious these characters are. They're basically selfish people who have no idea how annoying and overbearing they sound. And this rule applies to the entire cast. Every single character, be it hero, villain, or supporting role, is selfish, obnoxious, and seems to favor violence as the immediate solution to nearly every problem.

There's an absurdity to the story of this movie that would make for a very good Rifftrax. The entire climax manages to mount into an apex of comedy as...well, I don't really want to spoil it, but let's just say that nearly every character outside of the three above manages to exhibit stupidity on a global scale as they come up with increasingly terrible ideas and are astonished that they receive terrible results. So, naturally, they come up with even more terrible ideas, since clearly the problem with the initial terrible ideas is that they weren't terrible enough.

"The Flu" also manages the rare task of making me annoyed at the depiction of Americans. Speaking as an American, I don't even like the American government. But draconian disease containment measures are practically the only evil thing we don't do. The last time we had an epidemic (HIV/AIDs) the main problem was the government's complete unwillingness to enact any kind of containment procedure at all. So for Americans to show up here and...well, I don't want to spoil the terrible idea the Americans come up with, because it really is astonishing in its sheer bad taste.

The movie isn't completely irredeemable. The special effects and set design are pretty good, and anytime there's ever anything to look at, typically, it is something worth looking at. The final act has lots of these good visual setpieces, although I was too exhausted by most of the preceding portions of the movie to really enjoy them. Additionally, there is way, way too much use of close-up shots. I barely even like any of these characters, I certainly don't want to see them emoting.

Another grain of redemption is that, while the premise is certainly xenophobic, "The Flu"s patient zero is the closest thing to a likable character this movie has. He's not always the smartest guy, but he's pretty good at acting in his own self-interests while still trying to avoid hurting other people. Unfortunately, he's also at the epicenter of an insultingly elaborate chain of coincidences so...look, if stupid nonsensical plotting isn't a complete turn off for you in a big-budget spectacle, "The Flu" might be passable entertainment. Personally, I have a minimum threshold for likable characters and coherence which this movie does not pass, so I can't recommend it.