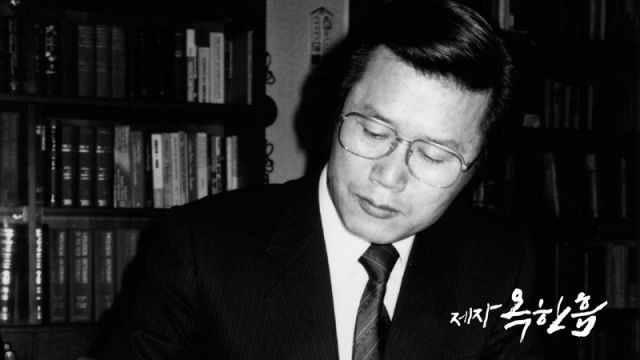 Earlier this year "The Cardinal" gave us a good look at the Catholic doctrine in South Korea, one largely focused on good works. "The Follower, Ok Han-heum" provides an interesting companion piece. It, too, is about a major religious figure in the South Korea Church- but this time the Church is the Protestant one. And consequently, there are very different priorities at play. Where "The Cardinal" marked Kim Soo-hwan by his deeds, "The Follower, Ok Han-heum" is marked by his speeches.

I have to confess that initially, my reaction toward this documentary was somewhat sour as a result. Part of this is just due to personal differences about doctrine. Ok Han-heum is a firebrand preacher in the American mode, something explicitly clarified by the documentary as it notes his studies of American evangelical technique. His churches, too, resemble the megachurches of the United States, and I remembered with some discomfort the scandals this brand of religion brought in my home country, as several of these pastors were eventually discovered to be horribly corrupt.

Fortunately Ok Han-heum doesn't appear to have had any of these ethical issues. Note that since this documentary was obviously produced by his supporters, it's not like we'd be getting an objective source of information anyway. But let's ignore the historical bits and focus on the more essential question- to the person unfamiliar with the trends in Korean Evangelical Christianity, is this movie informative?

From a factual perspective certainly. Ok Han-heum's deeds and feelings are very clearly outlined. But what ends up being more relevant and interesting as time goes on are Ok Han-heum's words. Now, again, I'm personally more inclined to judge a religions by deeds than words. But surprisingly, "The Follower, Ok Han-heum" ends up making a fairly compelling argument for why words matter.

To put it simply, Ok Han-heum was an extremely gifted speaker. He wasn't just a firebrand. Listen to the quivering in his voice, the general serious emotions that come alive any time the man starts speaking. This wasn't a game to him. Ok Han-heum clearly believed every word. For him, the truth of the Gospel was unmistakable, and any failure on the part of the Church to properly minister was a failing of the Church that had to be corrected through better management.

That's one of the main fascinating parts on display here, is that while Ok Han-heum never really attacks his fellow pastors, he is extremely willing to be critical of them. There's obvious faith behind his speech, not just that he believes in God, but also that he believes in the human spirit. Ok Han-heum was absolutely convinced that we could do better if we would only have faith and give it our all.

This makes for a surprisingly powerful persuasive bend. Truthfully speaking, I doubt this documentary will be all that convincing to non-believers, but it does make for a fairly effective argument as to why people choose to believe in the first place. As presented in "The Follower, Ok Han-heum", the Church is a place of spiritual escape and fulfillment. It's a subtle, powerful statement that goes beyond the standard limits of the documentary format, making this a film worth watching on multiple informational and emotional levels.

"The Follower, Ok Han-heum" is directed by Kim Sang-cheol and narrated by Kwon Oh-jung and Sung Yu-ri.