[HanCinema's Film Review] "The Gangster, The Cop, The Devil" 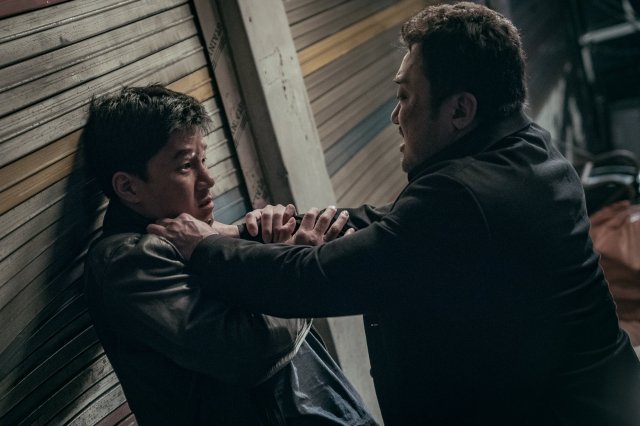 In 2005, "The Gangster, The Cop, The Devil" opens up on a dark stormy night. Kyeong-ho (played by Kim Sung-gyu) doesn't seem right in the head- an impression soon confirmed when he flips out randomly after an apparent automobile accident. Then, in turn, we are introduced to the impatient, hotheaded cop Tae-sook (played by Kim Moo-yul) and the exceptionally patient, eternally calm gang leader Dong-soo (played by Ma Dong-seok) and their own particularly violent solutions to generally minor problems.

The Korean title of "The Gangster, The Cop, The Devil" roughly translates as they're all bad dudes. Literally evil people, but I think bad dudes gets the idea across better. It's a fairly apt description- "The Gangster, The Cop, The Devil" is the story of these three characters and their completely assymetric war over oddly symmetric purposes. Tae-sook wants justice, Dong-soo wants revenge, and Kyeong-ho just wants to kill for the fun of it.

That last one was a bit of a disappointment for me. After a failed attack a peculiar scene at a dog meat farm seems to imply that Kyeong-ho is actually compelled to kill for some unclear mental reason, and believes disastrous consequences should he fail. Alas, the more we see of Kyeong-ho's character the clearer it is that he's a fairly one-note serial killer archetype, even managing to pull out that classic we're not so different you and I groaner of a cliché.

Now Tae-sook and Dong-soo- those are characters, with great chemistry to boot. Neither one likes each other, or trusts each other, or even necessarily believes in the other's competence. Even though marketing for "The Gangster, The Cop, The Devil" emphasizes that the two team up, practically speaking they're fighting each other about as often as they're searching for clues about Kyeong-ho. In some particularly hilarious moments they get so completely sidetracked that Kyeong-ho's presence in the story at all is an afterthought, such that Kyeong-ho has to barge back in insulted that they're apparently ignoring him.

Another misleading bit of marketing- "The Gangster, The Cop, The Devil" isn't as violent as it sounds or looks at all, because so much of the movie just consists of protracted negotiations and investigation. But make no mistake, writer/director Lee Won-tae easily makes up for the lack of quantity with exceptional quality in the fight scenes. The best ones are actually the shortest, where frailty is emphasized as a single bone crunching punch or well-aimed stab is enough to make one of the three titular tough guys start wondering if they'd be better off making a run for it.

The proceedings are also elevated by exceptionally strong performances from Kim Moo-yul and Ma Dong-seok, both of whom are highly driven and motivated men with the necessary muscle to make their ambitions reality. It's a pity the script doesn't really take this into account though. For all the competence of his antagonists Kyeong-ho is ultimately located more by dumb luck and hubris than he is by actually being convincingly defeated. I could have done without that goofy court scene too.

"[HanCinema's Film Review] "The Gangster, The Cop, The Devil""
by HanCinema is licensed under a Creative Commons Attribution-Share Alike 3.0 Unported License.