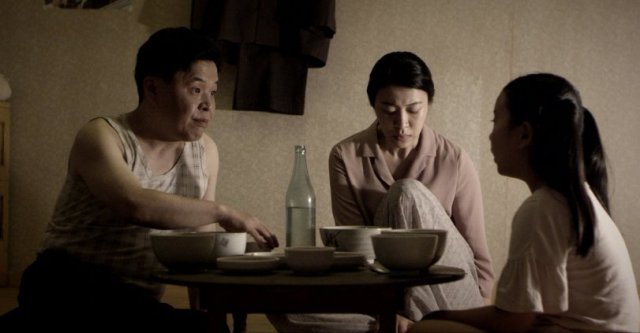 So-jeong (played by Kim So-min) is the wife of Kang-ho (played by Moon Young-dong), who was once a rising star in the North Korean military before he lost his legs. Ever since then life has been fairly miserable. Their household can't make enough money to get by and Kang-ho is increasingly hostile to his own family, even yelling at their only adorable daughter Hyo-sim (played by Kim Ryeo-won). Though So-jeong has found a solution of sorts it's obviously not sustainable.

While "The Gift of Love" explicitly bills itself as a true story based on the repressive evil of the North Korean government, the film is quite a bit more universalist in presentation than the production's obvious propagandistic aims and barely even attempted North Korean accents would have you believe. The narrative is a mishmash of fairy tale and urban legend elements. From fairy tales we get poverty bittersweetly transcended by virtue. From urban legends we get the vaguely plausible yet highly relatable feel of an anecdote that totally happened to the friend of some guy I know.

The result is a story that is spooky from its sheer mundanity. What would you do if you lost your legs? What would you do if the man you loved constantly lashed out at you due to his own impotence? While "The Gift of Love" gets in a few obvious digs at the North Korean regime the simple fact of the matter is that women like So-jeong are more likely to beaten by cops than helped by them wherever they are.

The class commentary is another well-put but obviously misaimed point. Every so often we jump from the story of what happens to So-jeong and Kang-ho that one fateful candlelit night they finally accepted all hope is lost to the insultingly petty problems of a much more well-to-do family. What makes the story of So-jeong and Kang-ho tragic is that they're completely cut off from everyone. No friends, no societal network, and in the end nothing to live for.

Even the big magical solution is surprisingly universalist in sentiment. I could easily see an American in So-jeong's position telling an equally ridiculous story about Barack Obama, or an Englishwoman going on about the Queen of England. What defines the story is not any specifically North Korean quantity but rather how desperation will make people want to believe ridiculous things. When the alternative is sheer hopelessness, it's hard to blame them.

"The Gift of Love" also benefits from surprisingly tight editing as writer/director Kim Gyoo-min-I constantly weaves in flashbacks, fantasy sequences, and far-off scenes in ways that are never confusing. Because So-jeong and Kang-ho are trapped in a purgatorial grind, the variation in their miserable daily lives is easy to identify by preceding scenes. So-jeong and Kang-ho themselves are also acutely aware of the difference, quickly recognizing all the difference that even mild luxuries can make. "The Gift of Love" has no frills but it really doesn't need them. The movie is minimalist yet highly satisfying and well worth watching.

"[HanCinema's Film Review] "The Gift of Love""
by HanCinema is licensed under a Creative Commons Attribution-Share Alike 3.0 Unported License.