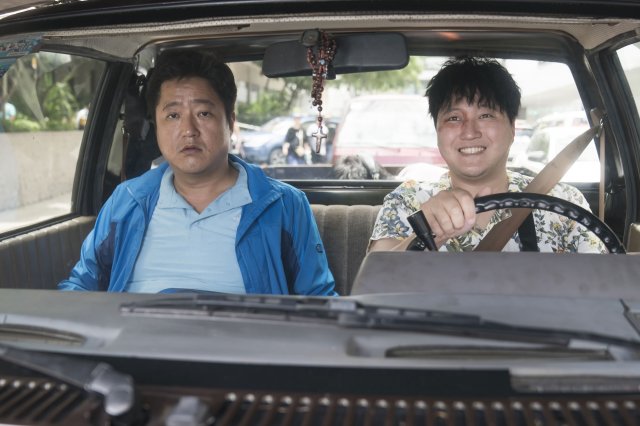 Byeong-soo (played by Kwak Do-won) is a bumbling Daejeon police officer, a sort of regional cop in the Joe Don Baker mold of being a crude loudmouth but not necessarily bad at his job. At least that was my initial impression. Then "The Golden Holiday" decided to get focused on a plot that is somehow simultaneously convoluted yet also really boring. The short of it is, Byeong-soo takes his family on vacation to the Phillipines with the secret motive of hunting down Japanese gold.

Somewhat incredibly, most of that summary doesn't even matter when it comes to the story. Byeong-soo's family never actually does anything. They just have a vacation while Byeong-soo is running around in the underworld, and seem underconcerned when they finally do find out what he's been up to. And the whole Japanese gold thing is incredibly silly, as are other turnabouts involving Byeong-soo being heavily in debt and corruption in his local police department.

Really, writer/director Kim Bong-han could have trimmed a lot of the fat off this movie by just having Byeong-soo's secret motivation to be to clear the name of his wrongly accused friend Yong-bae (played by Kim Sang-ho). Instead plot details trickle down at a generally inscrutable pace. Extended sequences involving not terribly funny gags that go nowhere are abruptly ended by sudden coincidences or bouts of competence that threaten to end the story then and there so another contrivance pops up to further delay the runtime.

Why does this movie even exist? Well that's no mystery- because writer/director Kim Bong-han got money to make a movie in the Phillipines, and the script was written backwards from the location shooting. We get to see all the funnest sites in that country, including but not limited to- mango juice stalls, jeepneys, scuba diving, sinister abandoned warehouses, jails, illicit nightclubs, and unhelpful embassy officials. Did I mention that Byeong-soo gets all of his stuff stolen at one point?

"The Golden Holiday" has a lot of mixed messages. I wouldn't necessarily call it racist. Save for the more touristy elements nearly all of these plot points can and do feature in crime movies set in South Korea. But the cumulative effect is still to make the Phillipines not look like a very nice place to have a vacation. Byeong-soo teaming up with loser expat Man-cheol (played by Kim Dae-myung) just accentuates this seedy quality, making it hard to imagine why anyone would want to live there.

I could, with effort, apply a more sympathetic reading to the movie. The addition of two local goofballs to the entourage later on, coupled with the later revelation they are hypercompetent in regards to one specific skill set, suggests there is more to the Phillipines than meets the eye. The trouble is, "The Golden Holiday" itself is so lacking in depth and motivation it's hard to muster much enthusiasm about whether the characters succeed in any of their goals. There aren't any dramatic stakes. Worse, the movie simply isn't funny, despite clearly attempting to be a comedy.