[HanCinema's Film Review] "The Good, the Bad, the Weird" 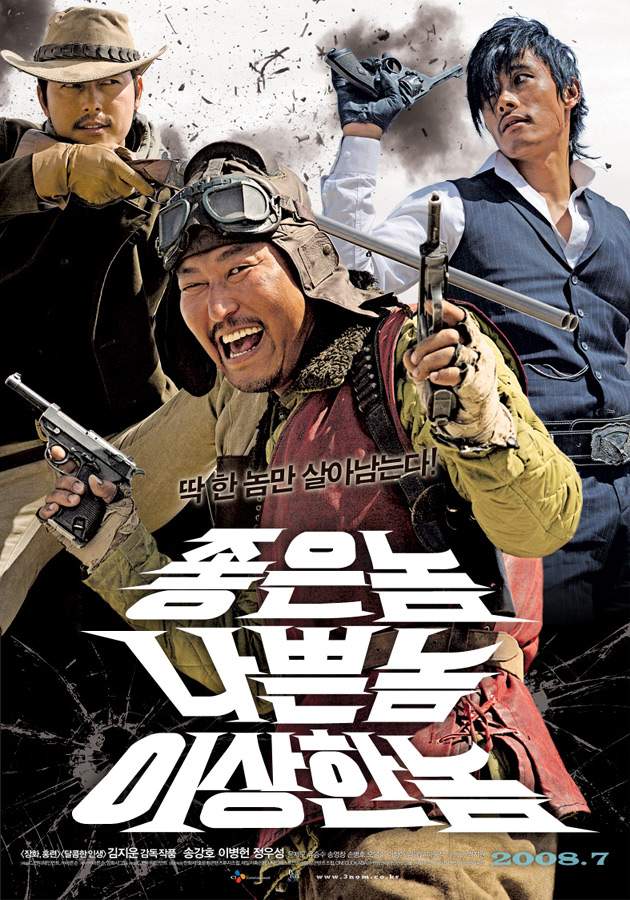 The plot is simple enough- a mysterious treasure map is the key to the motivations behind about eight different distinct factions of individuals with their own motivations for acquiring it. There are possibly more. After a certain point it just gets really difficult to keep track of everyone in this movie, As a result, it gets to be a bit of a headache trying to keep straight which characters know what, when, and why. And it really isn't a whole lot of fun to guess why, either.

The good news is that aside from this massive plot snarl, "The Good, the Bad, the Weird" delivers exactly what it promises. Gunfights, explosions, and tricky logistical fistfights abound as the titular characters try to crash through every new scene while still staying alive- regardless of whatever ridiculous random screen props they're forced to utilize in the process. It's to Kim Jee-woon's credit that it's easy to keep track of all these breakneck fights- especially considering how he fumbles what should have been a fairly transparent script.

It's a bit of a disappointment in that respect- it's fairly clear that Kim Jee-woon thinks this is a much more clever story than it really is. I was quite disappointed with the international ending, which is unnecessarily ambiguous as to the fate of the main characters. I just didn't really care enough about any of them individually for that to really work- and consequently, much prefer the Korean version, intended for mass audiences, which specifically spells their fate out in several extra minutes.

While some movies can work well in the confines of complicated, introspective, and action-packed, "The Good, the Bad, the Weird" fails on that metric. The more energy I put into trying to understand anything that was happened, the bigger my splitting headache became as I became acutely aware of just how loud everything in this movie is except for the dialogue.

But- if I try to watch it divorced from the plot? If I see it only as a vehicle of style, analyzing individual setpieces in terms of design? Then it's excellent attention-attracting stuff. The beauty of the one-word descriptions of the three lead characters is that, absent any other context, it is extremely easy to figure out what's going on. It's only in the process of applying logic to this movie that any kind of weakness stands out.

And what's the point of bothering with that? I've seen pieces of "The Good, the Bad, the Weird" both in a theater-style environment as well as on the small screen. On the big screen, there's no dignity to the action and I'm engulfed in confusion. Nestled inside smaller confines, though, and in a more casual environment, the strengths of the movie are much more obvious and pleasing.

There's nothing in "The Good, the Bad, the Weird" that's going to change the mind of a person who doesn't already enjoy action flicks. It will frustrate anyone who is looking for something more slowly paced and deliberate about its plot. So watch this movie only if you can accept it on its setpiece terms. If the plot starts to sound interesting just ignore it. That bit's a trap and will only give you headaches in the long run.

"The Good, the Bad, the Weird" iirected by Kim Jee-woon and features Song Kang-ho, Lee Byung-hun and Jung Woo-sung.

"[HanCinema's Film Review] "The Good, the Bad, the Weird""
by HanCinema is licensed under a Creative Commons Attribution-Share Alike 3.0 Unported License.
Based on a work from this source