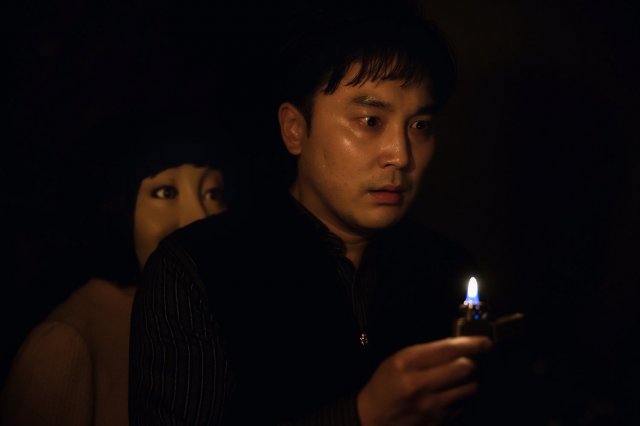 Promotional materials for "The Grotesque Mansion" emphasized how the story for this omnibus horror film was literally designed by a Markov generator, working to produce never before seen permutations of horror story tropes. It's an interesting idea in theory. But in practice "The Grotesque Mansion" is soulless. The ideas may be original but there's really no point to any of them. They barely connect to each other in the context of a single short, let alone the full omnibus.

The first one I struggle to remember what exactly the plot even was at all. Some writer, who's kind of a jerk to his wife, comes the mansion and sees scary stuff. Literally the only specific part of the first story I can remember is that at one point he goes to the pharmacist for headache medication, and then the pharmacist is the main character of the second story. She's in a relationship with a married man and some kind of weird...thing happens in the shower?

I was relieved when the third segment at least had some distinct plot hooks starring the real estate agent for the writer in the first segment. His life at home is, ah, unsettling, first because there's something very wrong with his sink and second because he's constantly talking to this expressionless doll as if it were his wife. These two plot points don't really have anything to do with each other, but there's some nice freaky imagery in there. Even the rubber glove had me feeling nervous.

Where the prop design really sets the third segment apart, makeup is the calling card for the fourth segment, which deals with student roommates and the very disturbing things that happen to organic objects in their apartment. I really do need to emphasize that I'm not being intentionally flippant. All of these stories are just a few random elements tossed together, a twist that doesn't make any sense, and then we're on to the next story.

Like, the last short involves mummies, somehow. Allegedly all of these stories take place at the same apartment complex. Yet none of them have anything to do with each other except for some shared characters. We're no closer to understanding why the mansion is so grotesque at the end than we are at the beginning. Even the framing device is of no help. Despite the inherently artificial nature of the set-up, not even the sheer arbitrary nature of the horror tropes that are used is so much as commented on.

Seo Hyun-woo gives a powerful performance in the third story largely because he's the only actor who's given much to work with beyond the random tropes. His character is in his forties, has to be nice to people all day no matter how rude they are to him, is a little crazy, and suffers from the same shoddy housing issues that define his work in the real estate industry. The sheer irony of that set-up allows for the soul that's simply missing from the other segments.