[HanCinema's Film Review] "The Haunted House: The Secret of the Cave" 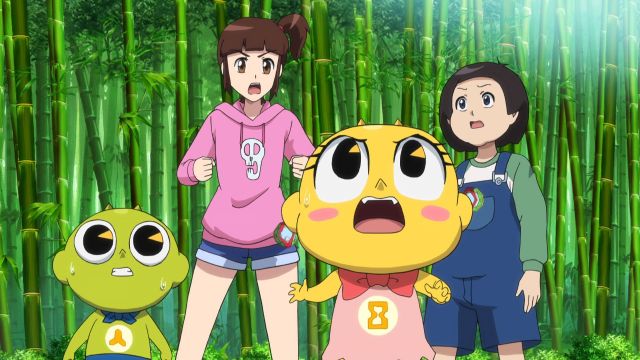 One of the more popular cartoons on South Korea's Tooniverse channel is...apparently called Haunted House. That's a bad name. The main gimmick of the series is that it actually takes place in a relatively modern haunted apartment complex. The protagonists, spunky older sister Ha-ri (voiced by Kim Yeong-eun) and her chubby younger brother Doo-ri (played by Kim Chae-ha) work together with the small, big-eyed green goblin Sin-bi (voiced by Jo Hyeon-jeong) to catch ghosts. The meaning of Sin-bi's name doubles as mysterious or haunted in Korean, so the title is also a pun.

Surprisingly little of this is relevant to the movie proper. The cold open is a decent enough showcase of what a typical episode looks like in terms of ghost-hunting. But after that we get, by my count, exactly one ghost. It's introduced really late. Even more frustrating, though, is that Ha-ri never uses her special abilities and keeps getting caught flat-footed. The antagonist is mostly fought by characters who aren't Ha-ri, and further unsatisfying magical mumbo jumbo is used to more permanently seal the ghost.

The weak climax is a real shame, since up until that point "The Haunted House: The Secret of the Cave" manages to be a fairly engaging mystery. A bunch of kids go to explore this weird cave, further weird stuff happens. And then, before we know it, Ha-ri is face-to-face with an obvious metaphor for the opening fight she has with her mom, Ji-mi (voiced by Lee So-eun). Today, she's a cop keeping the community safe from things that aren't ghosts. And in the past she was...an anti-development terrorist apparently?

Without a doubt my favorite part of "The Haunted House: The Secret of the Cave" was the movie's middle portion- the part where noone's in the cave. That's because this part highlights the cartoon's main paradoxical appeal. Sure, the main hook is that Ha-ri has to go around with her sidekicks catching ghosts. But aside from that she's a surprisingly normal and relatable preteen girl whose main focus in life is on maintaining relationships with her friends and family.

The world is vivid and likable precisely because it's so normal. When ghosts pop up, they actually come off as scarier than they should simply because all the context of normal interpersonal drama makes the appearance of ghosts surprising, jarring, and most of all scary. Even Sin-bi exists mostly as a comic relief character. No more complicated goal is presented than just that Ha-ri needs to catch all the ghosts, and that's all we really need.

This very strong personality is present throughout "The Haunted House: The Secret of the Cave" and makes the movie pleasant enough to watch. I was mainly just frustrated at how the production team put all the narrative effort into making a coherent mystery rather than making the story more meaningfully interesting. It still irks me how the whole subplot of Ji-mi terrorizing construction workers is resolved entirely off-screen, when that was by far the movie's most interesting hook.

"The Haunted House: The Secret of the Cave" is directed by Kim Byung-gab and voiced by Jo Hyeon-jeong, Kim Young-eun, Kim Chae-ha and Yang Jeong-hwa.

"[HanCinema's Film Review] "The Haunted House: The Secret of the Cave""
by HanCinema is licensed under a Creative Commons Attribution-Share Alike 3.0 Unported License.