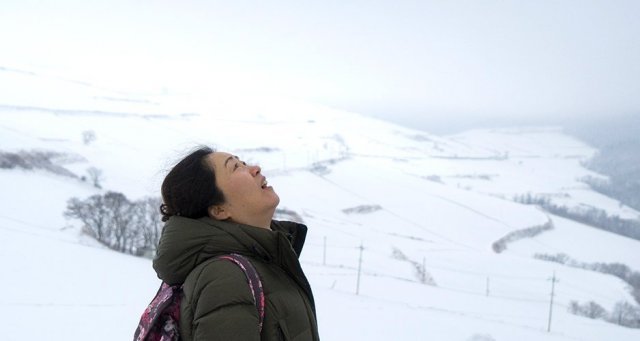 Yeong-boon (played by Jung Eun-kyung-I) is an older woman who contrives an excuse to return to her hometown of Taebaek on South Korea's eastern coast. Taebaek not a highly populated area, although "The Hill of Wind" is somewhat vague on this point since so much of the action takes place at night. "The Hill of Wind" is similarly ambiguous when it comes to Yeong-boon's relationship with her daughter Han-hee (played by Jang Sun).

I appreciated how writer/director Park Suk-young allows for a deliberately long lingering pause over the letter that details almost all of the exposition "The Hill of Wind" ever gives us. While Yeong-boon herself almost certainly finishes reading the letter immediately, it's easy to visualize her standing in silence over the letter's contents, unsure of what to do with the information it contains. Her unromantic and borderline vicious action of throwing away the accompanying business card also says volumes about Yeong-boon's personality. This even as the immediately proceeding story points show little to no hint of the inner cruelty that prompted Yeong-boon to commit such an action.

"The Hill of Wind" is loaded with subtle, unsentimental details like this. The way Yeong-boon acquires the letter is similarly striking. She knocks loudly and briefly on the door of a beauty salon that is pitch black and obviously closed down for the night. How did Yeong-boon know there was anybody in there? Well, because small business owners in Taebaek can't afford to go to sleep in their actual home at night. They sleep where they work.

So it's little surprise that Han-hee has met a similar fate, working as a pilates instructor with no students and also pretty clearly not having the business acumen necessary to find any. The world of Taebaek that writer/director Park Suk-young shows us is full of sad little moments like this. Yet Han-hee is shockingly optimistic for her personal problems. She's a marked contrast to Yeong-boon, who is relatively well-off, yet acts haunted, as if she's being chased by some unknown past crime.

I'm not really sure why "The Hill of Wind" is called that. The word wind in Korean can also be transliterated as hope, which is much more obviously the intent here. The reality of the hilly dying town of Taebaek is contrasted with Han-hee's upbeat personality and sunny optimism much the same way as it contrasts with her mother's strange attitude. "The Hill of Wind" takes the anonymity of their strange interpersonal reactions and recasts them as a powerful lifeline, showing how even mundane conversations can have thrillingly positive spiritual consequences.

I also rather enjoyed the understated beauty of Taebaek as seen through writer/director Park Sun-young's excellent cinematography. We simultaneously see Taebaek as a place of hope and misery, just as its characters so often do, because of the way the backdrop promotes introspection. Similarly, Jung Eun-kyung-I and Jang Sun give fantastic performances in the leading roles, their smallest quirks carefully curated to maximize the emotional resonance of their character arcs.

"[HanCinema's Film Review] "The Hill of Wind""
by HanCinema is licensed under a Creative Commons Attribution-Share Alike 3.0 Unported License.