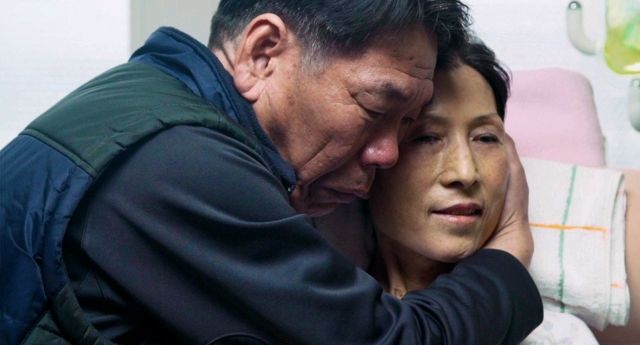 Inevitably, we all have to die. And provided it isn't a sudden death, assuming it's just the slow, inevitable failure of a body growing older, you will probably have to await those final moments in "The Hospice". On a primary level this documentary is a rather personal one. The viewer may not immediately identify with any of the people profiled here. But sooner or later, we're all going to end up in that generally unpleasant unavoidable situation.

"The Hospice" isn't a particularly depressing documentary, remarkable as that may sound. One of the main benefits of hospice care is that it explicitly provides patients with the opportunity to meet death on their own terms. So there's a lot of explicit discussion of the topic between the afflicted, their families, and their doctors about the best way to endure the situation. So when death inevitably happens, it might be painful, but most of the time it's at least not a huge shocking surprise. That's something, at least.

Oddly enough it's the care providers who ultimately appear to feel the situation the most acutely. They're well familiar with the routine. Someone dies, someone new moves into the bed. That much isn't something that can really be discussed, because the topic is all too morbid. It's bad enough that all these people have to worry about their own deaths without bringing in worries concerning complete strangers. Even though, fittingly enough, another big part of life at the hospice is making friends with other people who aren't all that far away from death's door.

Honestly, there really isn't all that much to say about "The Hospice" that the movie itself doesn't do a whole lot better. Director Lee Chang-jae makes excellent use here of the apparent objectivity of the camera. To the people here, there just isn't much point to trying to put on a big front anymore, to put on a brave face. Soon, they are going to die, and nothing will change that grief. The best they can do is enjoy their last moments and prevent their grieving family members from lingering too long on these sad memories.

This transparency, though, is also in many ways the main problem. "The Hospice" is a mostly depressing film that tries but doesn't really get to be genuinely uplifting. While this is perfectly accurate in terms of describing the emotions involved with facing death, I can't really hold it against anyone for not wanting to watch the documentary. At best, "The Hospice" provides weak comfort to those of you who have to face this situation one day yourselves. You're not alone in regards to this very human anxiety, nor are you necessarily alone when the dreaded moment finally arrives.

"The Hospice" overall really isn't art so much as it is an accurate depiction of life, for better or worse. There's no big profound insights here, just a sort of bland acceptance. Also magic tricks. It's fitting how those are never explained, even if the aspiring magicians don't manage them with much finesse. But then that's the whole point. You'll probably manage life and death wrong, too. That's OK though, just as long as you're able to take solace in it.

"The Hospice" is directed by Lee Chang-jae