[HanCinema's Film Review] "The House of Us" 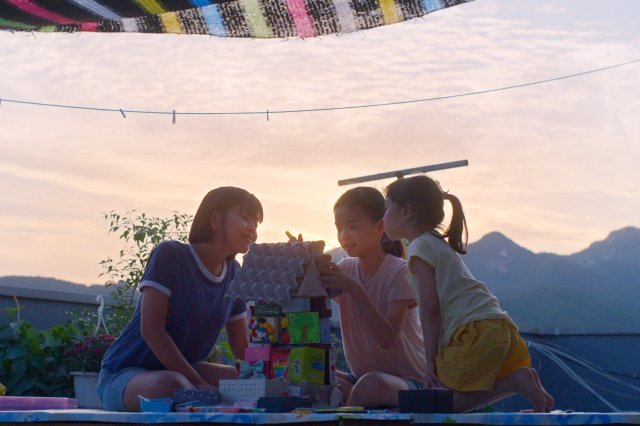 Though it has a similar title to "The World of Us" writer/director Yoon Ga-eun did not develop "The House of Us" as a spirutal sequel. As filming continued the phrase "The House of Us" or literally just our home frequently recurs and has obvious symbolic power. Ha-na (played by Kim Na-yeon) feels adrift in her own family as her parents always fight and her brother's always aloof. What kind of home or family is that supposed to be?

After meticulously going over Ha-na's struggle to try and rebuild her family, writer/director Yoon Ga-eun introduces Yoo-mi (played by Kim Si-ah) and Yoo-jin (played by Joo Ye-rim), sisters who have a home in the sense that they have each other but not that they have stability. The three girls are drawn to each other as Ha-na offers the younger sisters a sense of permanence while the younger sisters give her a strong emotional bond worth preserving.

"The House of Us" is told from a child's perspective- the film's a coming-of-age story about realizing how adults are not necessarily reliable as a child might think in terms of self-interest. Yet the movie has little sense of tragedy. There's exactly one extended dangerous moment which confirms the opposite message. While adults aren't perfect, the fact that Han-na isn't an adult means that her ideas and thought process are not as reliable as she thinks.

This is a wonderfully nostalgic feeling that perfectly gets to the heart of what it's like to be a kid. We see writer/director Yoon Ga-eun perfectly capture the sheer glee a child feels at having figured out an adult's plan and then subverting it. There's the giggling delight of spying on and embarrassing an older sibling over something that's not actually as important as he thinks. The spontaneity of an impromptu water fight is another one of those childish joys that we as adults just can't reproduce.

It's all a matter of thought process and living in the moment. Indeed, the main conflict comes in the form of how Ha-na, Yoo-mi, and Yoo-jin realize that for all their best efforts they can't be together forever. They can't become each other's family, and each other's home, no matter how frustrated they might be with their parents. They clearly know this, yet they still fantasize. They still hope. That's the note the movie leaves off on, ambiguous about the girls' future, how they'll remember each other, and whether they've actually learned anything relevant to their more long term problems.

That's all critical to why the events of "The House of Us" are such a critical long-term memory to the girls. Whether the future bodes ill or good for them, their time together is powerfully symbolic. This was their first taste of powerful social bonds outside of the context of family. A person can't really forget their first friend completely. For some of us that's for the better, and for others that's for the worse. In the case of "The House of Us" we get a vivid example of how that's for their better.

"[HanCinema's Film Review] "The House of Us""
by HanCinema is licensed under a Creative Commons Attribution-Share Alike 3.0 Unported License.