[HanCinema's Film Review] "The Journey of the 12 Cats" 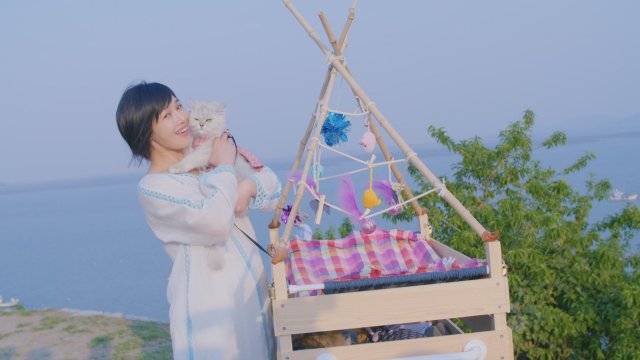 While billed as a documentary "The Journey of the 12 Cats" is really more of a hybrid project. I am reasonably sure that actress Sun-Woo Sun does indeed own twelve cats, and that these are the same twelve cats featured in the movie. I'm also reasonably sure that she took them on a vacation to the ocean, and that director Park Beom-jun filmed her doing so. But the presence of other actors in the movie, as well as the fact that the cats are given voices, does suggest a bit of stage management in the background.

In contrast to "Hello, My Cat", where the voices were annoying and distracting, the cat voices in "The Journey of the 12 Cats" are fairly appropriate. Part of what makes them work is that the cats never really talk that much. Lucky (voiced by Shin Hyung-tak) is responsible for most of the narration, framed as this is by his being the father cat who's looking after his children. Which is a bit of an anthropomorphization but uh...well...

"The Journey of the 12 Cats" isn't really about cats per se. The movie is more about the kinds of narratives cat people come up with to rationalize the behavior of their pets. So even though Lucky is the cat who provides most of the color commentary, it's actually Healthy (voiced by Kim Sara) that makes up the main story. He's an old, quiet cat, and Sun-Woo Sun came up with the elaborate cat vacation primarily as a sort of respite, to his life of woe.

I can't really get into the story without ruining the movie but a funny thing happened just now as I was trying to. Instead of thinking about the cats in this movie, and what their stories were, my mind drifted off to the stories of the cats that I've known throughout my life. Healthy's backstory brought that up- specifically, the pain a person feels when their cat is missing. And then, the pain the cat itself feels upon realizing that the outdoors is not a very fun place to live.

That's the main purpose "The Journey of the 12 Cats" serves as a film. As a storytelling device, it evokes personal stories about cats. So even if Sun-Woo Sun seems comically absorbed and obsessed with the lives of her cats, her life as well as the lives of the cats feels sympathetic and real because these are feelings that cat people just intrinsically get. That's the simplistic elegance of a cat, the animal that thinks it knows what it wants, even if you have to try and talk them to it.

I think it's safe to write that for someone who has never owned a cat, or doesn't even like cats that much...that you will hate this movie. Much like "Hello, My Cat" this movie is directly targeted toward a very specific audience of cat lovers. There's no deeper intrinsic truth here than just watching cats in their serenity or their meowing just being cats and enjoying that image for its inherent cuteness.