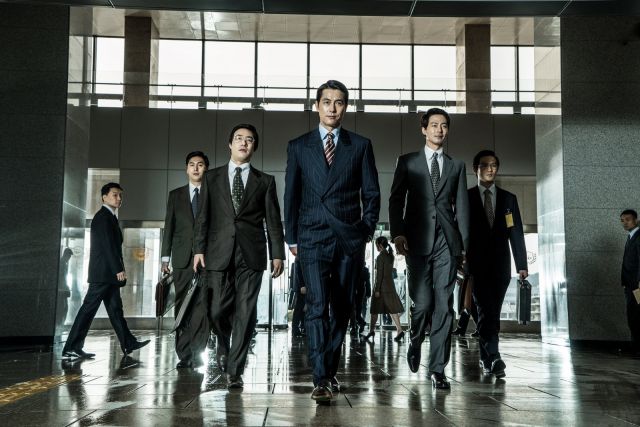 So you know that scene where the hero is about to start cleansing the world of evil, then the villain pops up and offers vast power for him to instead assist the forces of evil in ruling the universe? In "The King", that hero is low-born prosecutor Tae-soo (played by Jo In-sung). That villain is high-ranking special prosecutor Kang-sik (played by Jung Woo-sung). The scene happens early on, the twist being that Tae-soo accepts the offer, then proceeds to spend the rest of the movie as a largely passive observer.

"The King" is quite literally a movie about wasted potential. Tae-soo is exactly the kind of guy that a bad dude like Kang-sik needs to worry about. Poor life circumstances notwithstanding, Tae-soo is smart enough to succeed in law school, strong enough to take on just about anyone in a fight, and confident enough to successfully woo wealthy TV announcer Sang-hee (played by Kim Ah-joong) before the main plot ever even gets set into motion.

So with all these advantages, why does Tae-soo just decide not to participate in the epic story? Because...well, because it's easier. Sure, be a hero and you get all the glory for maybe like, the last five minutes. But up until that point, it's just parties parties parties for Tae-soo because that's what being a villain is all about. Bad boys don't care about building a lasting positive foundation. They just want to have fun, choosing to be oblivious to the notion that inevitably, someone will take them down simply because nature abhors a vacuum.

Indeed, Tae-soo is repugnant less for personally committing evil deeds and more from the generally bland way he stands by and watches compatriots make an obvious mockery of the criminal justice system. If you ever wondered what the villain's henchmen think while one overzealous follower murders a guy right in front of them in a fairly grisly way, you need only look so far as Tae-soo. He thinks to himself "eh that guy probably deserved it" and "do I have any other meetings today?"

The political implications of "The King" are also worth noting- this movie could not have been made even five years ago because South Korea's political tenor was much more optimistic back then. Now, writer/director Han Jae-rim feels the need to point out that none of this is new or sensational. There have always been guys like Kang-sik, and they have always been enabled by guys like Tae-soo whose love of money outweighs their love of justice.

I should note, though, that while of this is all quite interesting thematically none of it is really all that compelling cinematically. "The King" runs well over two hours long. That's a lot of time to spend watching characters basically just refuse to engage in character development again and again. Even Sang-hee manages to not be all that sympathetic, being, in the end, an opportunistic bully just like Tae-soo. It's a sad state these people are in that the closest they get to a happy ending has to be prompted by the actions of other more typically heroic characters we barely even get to see.