[HanCinema's Film Review] "The King of the Border" 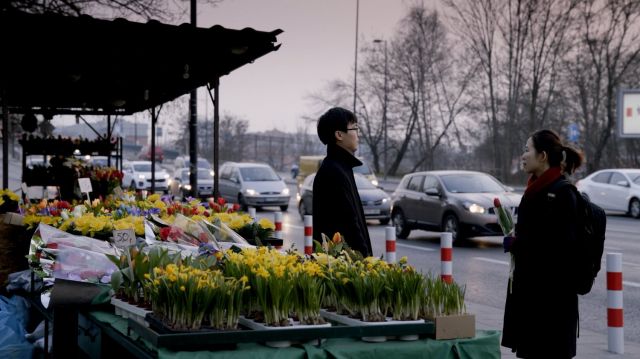 In the promising opening to "The King of the Border" Yoo-jin (played by Kim Sae-byuk) get off an airplane in Poland and then proceeds to ignore people. There's a lot of great dark travel comedy here. A person like Yoo-jin, when she goes to another country, does so because she specifically does not want to talk to people from her own country anymore. The escalating sequences that follow are amazing, as we see Yoo-jin forced to become more blunt about how she wants to be left alone.

Then Yoo-jin abruptly leaves the movie. While she does eventually come back, the circumstances are not promising. In the interim writer/director Lim Jung-hwan tells a very peculiar story wherein the characters Yoo-jin has already met spend their days playing board games and taking strange drug treatments and generally doing nothing particularly interesting. A weird setpiece on a train ensues, then Yoo-jin's character returns and "The King of the Border" just becomes its own meta-commentary.

The story, or what little story "The King of the Border" ever had to start out with, ends when the title card comes up somewhere around the halfway mark. Then we find out that while inspired by true events, everything we had seen up until that point was actually fictional embellishment. Of course, "The King of the Border" is a movie, so we already knew all that. Maybe this was supposed to be clever, but in practice the point is just belabored and uninteresting.

One of the few strong points of "The King of the Border" is the setting. Come see scenic Poland, where it's always cold, and the architecture is intimidating, and also no one likes to talk to each other. First thing I thought upon hearing about the premise to this film was, why would anyone want to go to Poland? Oddly enough I did feel like the characters we see are exactly the kind of people who would go to Poland, less because Poland is all that special and more because it's such an unusual place to want to go.

Which is to say, they want to seem like interesting people more than they want to actually be interesting. Observe how Dong-cheol (played by Cho Hyun-chul) is playing Pokemon Go. Not even a good Pokemon game, with any kind of depth. Just boring old Pokemon Go. Dong-cheol can't explain why he plays it, especially in social contexts where doing so is obviously extremely rude. But then that's where the characters of this film are at their finest, is when they're demonstrating generally pathetic quirks.

Alas, such a gimmick is only good for an hour or maybe ninety minutes at best. "The King of the Border" clocks in at two hours and is in dire need of editing, in addition to other technical challenges. The static camera is aggressively minimalistic, and the sound design is also quite poor. Entire sequences are difficult to understand because it sounds like there's a problem with the boom mike. But then, even with the proper amount of polish "The King of the Border" is at best an acquired taste.

"he King of the Border" is directed by Lim Jung-hwan, and features Cho Hyun-chul, Kim Sae-byuk, Jeong Hyeok-gi and Lee Yoo-jin-II.

"[HanCinema's Film Review] "The King of the Border""
by HanCinema is licensed under a Creative Commons Attribution-Share Alike 3.0 Unported License.