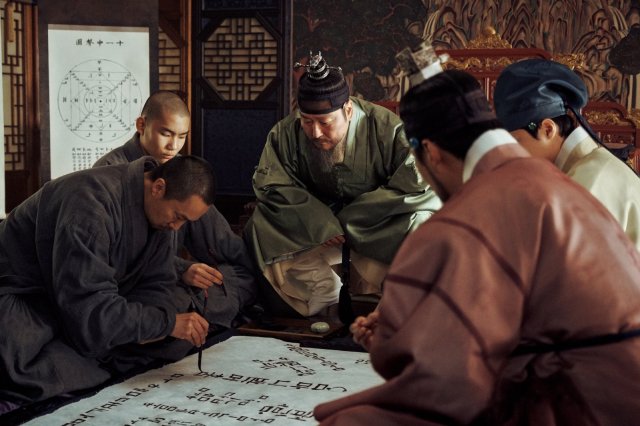 In the fairly morbid opening setpiece to "The King's Letters" King Sejong (played by Song Kang-ho) is very grumpily enduring an official ceremony that's being conducted in spoken Chinese, because at this time Korea is still using the Chinese script. Thunderclouds approach and then King Sejong goes home and destroys a bunch of books. In theory, such actions might be intended to make us appreciate King Sejong's passion toward the idea of a Korean script. But in practice? He just looks like a jerk.

In a way that's actually a bit of an accomplishment. Song Kang-ho is the best actor in South Korea, and possibly the entire world, when it comes to portraying relatable everymen. That Song Kang-ho's King Sejong is so unlikable is a testament to just how poorly cast he was in the role. "The King's Letters" is a dour, miserable, and surprisingly nihilistic statement about how developing an alphabet is a joyless, thankless process and how in the end everybody dies anyway so what does it even matter.

The scenes that actually depict the Korean alphabet being created are the main highlights. The scholarly process is excellent even as it is frequently undignified. We see the monks and the royal family pore over other existing alphabets, developing innovations and making breakthroughs. There's the need for simplistic characters, the underlying motivation for the shapes of the characters, quantities...then we can see small experiments in practice. There's even some neat linguistic lessons about how surprisingly often vowels aren't actually necessary.

Unfortunately these scenes are few and far between, because so much of the screentime is focused on King Sejong, and casual conversations that feature casual reference to incidents like where he murdered his wife's entire family. I mean yikes, I really can't overstate just how much of a killjoy King Sejong is here. Most accounts I've read of the historical King Sejong suggest that he was an unusuallly empathetic man by royal standards, yet in "The King's Letters" Song Kang-ho almost never emotes.

Well, wait, I guess there is the climax- which has a whole host of bizarre problems. It has nothing to do with the Korean alphabet development which had been the main crux of the plot up until that point. The familial relationships the climax does deal with are underdeveloped. And thanks to real life events the whole thing comes off as horribly ghoulish. Obviously this is not the fault of the production team but it just goes to show how poorly put together this project was that the climax does not flow naturally from the story.

There are three very different ideas at play in this movie. The first is how the Korean alphabet was developed, the second is the political pressure exerted against the idea of a Korean alphabet, and the third is about King Sejong's family. All of these ideas are completely at odds with each other tonally and crammed together as they are in "The King's Letters" they just combine to make a horribly awkward mess.