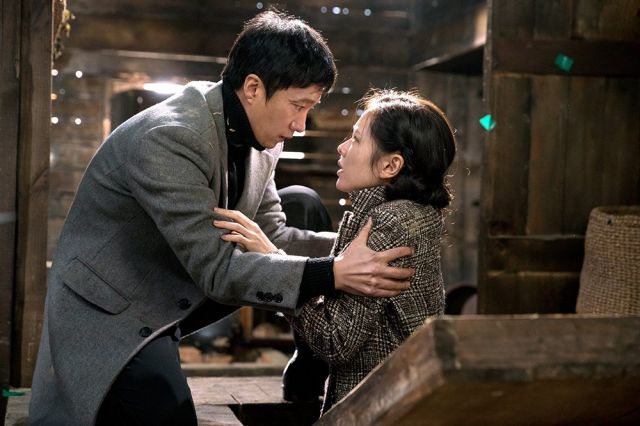 The year is 1962. Jang-han (played by Park Hae-il) is working as a reporter in South Korea, having managed to survive the last fifty-odd years of brutal repression. With the normalization of relations with Japan, Jang-han is at long last able to investigate what happened to his childhood friend Princess Deokhye (played by Son Ye-jin). The last survivor of the Joseon dynasty, Princess Deokhye suffered the worst fate possible for royal blood- she had to watch helplessly as her country was destroyed.

"The Last Princess" is, in many ways, a fantastically awkward film. This is clear from the first flashbacks which depict the Joseon royal family being photographed. Traditional royal clothing notwithstanding, early twentieth century set design makes it clear that this is a very different world than what Korean film usually shows us of royalty. Emperor Gojong (played by Baek Yoon-sik) has a powerful physical presence but no actual power. The best he can do is shame collaborators by pointing out the obvious- that they sold Korea out to foreigners.

Yet for all this, there's very little Princess Deokhye can actually do. Most of her people are in forced labor camps, and the upper classes who could provide the means for resistance against the Japanese care more about their personal wealth than their cultural heritage. Pay close attention to collaborator Taek-soo (played by Yoon Je-moon). While the Japanese may have the guns, director Heo Jin-ho makes it very clear that without men like Taek-soo, the Japanese could never have taken over the Korean peninsula.

This is all horribly dark material that only becomes more grim as Princess Deokhye is forced to accept her role as the designated survivor. Dynamic attempts to save Princess Deokhye only bring greater light to the helplessness of the era. In the end even victory ravages Princess Deokhye's precarious mental state. The twisted political wake of World War II makes it clear that whatever America's motives for fighting the Japanese, a desire to bring justice to the Korean peninsula was not one of them.

But don't watch "The Last Princess" for the history lesson. Watch it for Son Ye-jin. She gives the performance of her life as the vanquished regal woman who struggles with self-worth, having failed people who would have and did do everything in their power to save her, and their country. Even if Princess Deokhye's task was fundamentally impossible, that in no way lessens the pain. It's only small comfort when at the end Princess Deokhye tearfully reunites with her best friend, and visits the palace which was once her home. Those emotional bonds were, for better or worse, what kept Princess Deokhye alive.