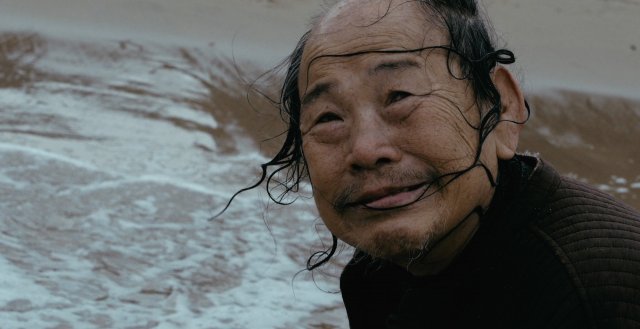 Il-rae (played by Park Hye-Teak) is old. It's not much of a spoiler to mention that he's close to death, given that "The Man of Merit" opens with him in a hospital with very uncertain odds for survival. Il-rae's backstory places the man's life as equally pathetic. He grew up in less than ideal conditions during the fifties, and much early conflict centers around his unsuccessful effort to enlist in an organization dedicated to the welfare of participants in the April Revolution.

In addition to not looking like his old photographs, Il-rae had the bad luck to be arrested for democratic agitation on March 13th. This was two days before the fraudulent election which took place on March 15th that is considered by the relevant organizations to be the official starting date for approved political prisoners. So begins Il-rae's quest to become "The Man of Merit" in that people recognize his valor. This is without stopping to wonder what valor there was to recognize.

"The Man of Merit" frequently feels like a critique of liberalism, although it's also just often enough a tragicomic exposition of Il-rar's character that I'm not totally sure this was the intent. Once Il-rae is sufficiently frustrated that calendar cutoffs are unjustly preventing him from getting his due recognition as a South Korean hero, he embarks on a very stupid prostitute redemption plot. This too is sad more than pathetic, and it's left ambiguous whether Il-rae himself actually has sex with the prostitute although ensuing events clearly implies that other people definitely did in part thanks to Il-rae's very naive decision making process.

Il-rae is a frustrating character in the same way that old people in general are frustrating. He seems genuinely oblivious to long-term consequences partially because as a person expecting to die any time now long-term consequences aren't exactly high on Il-rae's priority list. Weird interactions with his family heighten this sense of ennui. Indeed, even while Il-rae's not around, his family shows definite signs of dysfunction on their own.

"The Man of Merit" is fairly dark exposition as to the reality of everyday life in South Korea, with people both young and old trapped without a sense of general purpose. Il-rae's romanticization of events from sixty years in the past, and his continuing guileless assumption that compatriots from back then are still trustworthy in the present days, powerfully emphasize the futility of the struggle. By the time we return to the framing device, religious overtones about the meaning of life start to seem more literal than symbolic.

But then after all of that "The Man of Merit" jumps into a mostly happy ending that's every bit as realistic and absurd as everything we had seen up until that point. There's an indisputable charm to "The Man of Merit" that's only heightened by the intimate scenes of Chinese chess, or traditional meals, or even the karaoke bar that strongly emphasize the sad subtext of various South Korean cultural activites. And yet there's just enough blood to give the story real bite.

"[HanCinema's Film Review] "The Man of Merit""
by HanCinema is licensed under a Creative Commons Attribution-Share Alike 3.0 Unported License.