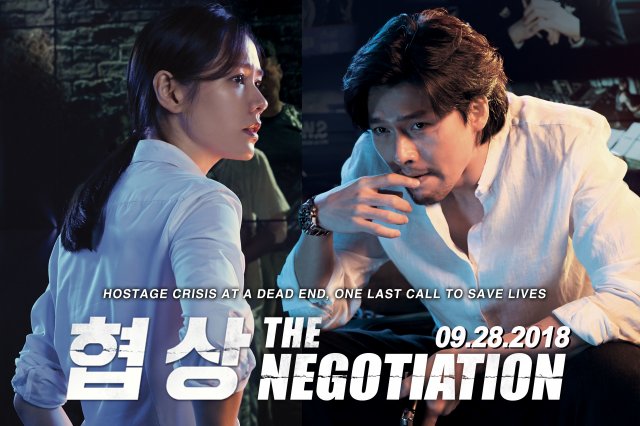 Chae-yoon is portrayed in this way long before Tae-goo ever actually shows up. The cold open makes it seem like Chae-yoon is an expert negotiator who can be relied on in a clutch situation but she just clumsily lies in English to the hostage takers for maybe half a scene while they simply continue to repeat their obviously impossible demands. The defeated demeanor Chae-yoon shows in the aftermath of the botched negotiation does not do much to bolster confidence in our plucky protagonist.

Chae-yoon rebounds somewhat when she first confronts Tae-goo and strategically decides to simply ignore his being an obnoxious bore. But then that ends up leading to a weird tactical argument, that just further compounds the problem of none of the characters seeming to have any idea what they're doing. They're not even incompetent in a very interesting way, we just watch them bicker over very dull minutae while Tae-goo sits in the background patiently waiting for his chance to toss them more exposition.

And that's all "The Negotiation" really has going for it is exposition. Given how high profile this release was back in 2018 I was a little taken aback to find that almost all of the action takes place in a fairly minimalist situation room, alongside other equally boring sets that could have been filmed nearly anywhere. It would seem that most of the budget for "The Negotiation" just went to pay for the salaries of Son Ye-jin and Hyun Bin.

But even that proved to be a wasted investment, since both have poor performances as shallow characters. Chae-yoon has an interest in justice, I guess. I would have thought that an otherwise fairly generic cop would have always been interested in justice personally. Tae-goo is just sad. Like literally, he has melancholic feelings. I was kind of curious who his apparent mercenary buddies were. Alas, aside from that one scene where they express generic support for Tae-goo as a comrade-in-arms we know basically nothing about them.

That's a very appropriate word here by the way. Generic. Conceivably interesting angles do present themselves. I could buy Chae-yoon as a police outsider jaded by systemic corruption. I could also have bought Tae-goo as a rogue whose main advantage is that no one on the other end of the video feed knows what his actual personality or motivation is. But instead of building off of distinctive hooks "The Negotiation" is so safe and predictable with its choice of sympathetic characters and villains that the whole project just feels horribly dull.