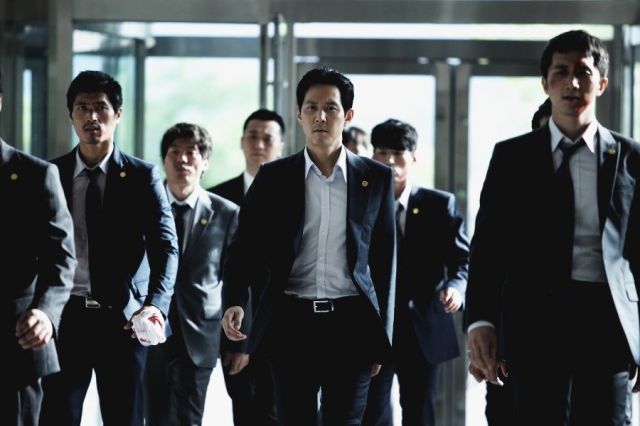 Ja-Seong (played by Lee Jung-jae) has taken the notion of a deep-undercover police assignment to ridiculous lengths. He's been imbedded with a high-level criminal organization for so long that he's the trusted right-hand lieutenant of a man with a very serious claim to the overall leadership. Ja-Seong has a strong reputation as a tough, competent enforcer. He has a wife and  deep personal friendships with other people inside the gang. And as an undercover cop, Ja-Seong has had about all he can take insofar as living his life as a lie.

"The New World" is an extremely emotional film. Not in terms of rage or anger, the typical gangster emotions, but rather love, loss, and wanderlust. In practical terms this movie is pretty much a melodrama. A late scene typifies this, with a deathbed scene that's basically tailor-designed to wring out the most personal, internally focused emotions imaginable where we finally discover the explanation for one character's curious decision to hold back.

And the incredible part is that this all works so well. I never would have pegged a gangster movie for one that could be improved by melodrama, and yet it's impossible to deny that that's exactly what "The New World" does. This film is not, by any means, about friendly lovable huggable people. The very first scene promises a sense of grotesque brutality for anyone caught breaking the rules, and the reality of the danger Ja-Seong faces never abates.

Yet for all these power struggles, these acts of vengeance, the very self-effacing nature of Ja-Seong's deep cover assignment, behind all of these motivations lies the basic desire for camaraderie. Even more startlingly, the other characters are fully aware of this. At multiple points we see them trying to use the promise or threat of emotional pain to directly or indirectly break each other's resolve and guarantee the desired course of action. In some ways these scenes are even more twisted than the film's typical gangster sadism. We get why traitors receive such horrific treatment- but why would anyone treat allies like this?

"The New World"'s answer to this question is that, for so many of the characters in this movie, the end result of the power struggle for gangster succession is just a game with winners and losers. The reason these people are fighting for the intended outcome has little to do with morality and everything to do with ambition. But which is the more important qualification? If the the gang is, in fact, a family, is it better off having a patriarch who likes being the one giving orders and will backstab anyone to get there or the one with a more sublime motivation?

I'm not sure I've ever seen any other piece of gangster fiction even get close to these ideas before- typically there's too much unironic adoration of the mafia's machismo culture to actually get around to boring stuff like feelings. But "The New World" completely redefines these assumptions, giving us masculine characters who have much more interesting motives than wanting to be top dog- and still provides action sequences of the highest thriller caliber. This is an excellent film, with narrative value that goes far beyond the basic conceit of the gangster film genre.

Available on Blu-ray and DVD from YESASIA and Amazon