[HanCinema's Film Review] "The Night of the Undead" 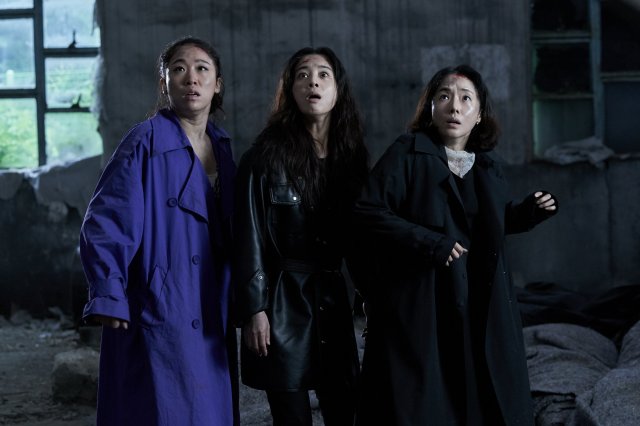 A buff naked man crashes from outer space in Cheonggyecheon. The onlookers, for the most part, try not to make a big deal of this. Then we transition to So-hee (played by Lee Jung-hyun), who tries not to make such a big deal of how much she loves her newlywed husband Man-gil (played by Kim Sung-oh), at least until circumstance leads her to suspect infidelity. Although it's not infidelity so much as...well...

Let's put it this way. Upon being informed by the dubiously credentialed Doctor Jang (played by Yang Dong-geun) of Man-gil's extraterrestrial origins and sinister motive, So-hee is hurt and confused, Eventually she's convinced of the need to kill the philanderer. To this task she enlists the aid of Se-ra (played by Seo Young-hee), a butcher who may or may not have murdered previous husbands in somewhat similar circumstances.

"The Night of the Undead" is first and foremost a bizarre black comedy. The large cast of characters repeatedly attempts murder with dubious success, and the complications arising from these imperfect homicides is what drives the next stage of the plot. The title of the movie, in Korean anyway, literally reads as night of the undying, in honor of the many characters who keep seeming to die but never quite get there.

"The Night of the Undead" is reminiscent of the weird movies of the first Korean Wave some twenty years back. As it happens director Sin Jeong-won was more a participant of that trend than fan, having made "To Catch a Virgin Ghost". "The Night of the Undead" is a similar experience, although seeing such a movie made in the modern day inevitably feels quite odd. Ah, how much a difference even a little cell phone placement can make.

But nothing about "The Night of the Undead" is even so mundane as that. We're talking about a comedy that has the recurring visual of a character drinking gasoline. The intrusion of extraterrestrial conspiracies into a movie that's basically just about infidelity is maximized for sheer eccentricity. The performances are all over the place, with each individual actor emoting as though they were in in a completely different kind of movie.

There's much charm in this discordance, particularly when the story forces its characters to play along with weird and seemingly pointless lies. The sobriety checkpoint is a high point. The scheme of our leading ladies is undone by their working so hard on their convoluted backstory they completely forget about the frontstory. Such is the fate of many at sobriety checkpoints.

The climax is as bewildering for the main characters as it is for us, featuring a giant fight out of nowhere, a pointless epilogue, and an equally pointless plot twist. Yet the meaningless intricacies of the plot in "The Night of the Undead" are its strongest selling point. The movie is social farce disguised as science fiction, a genre so underappreciated I liked "The Night of the Undead" in spite of, or possibly entirely due to, its sheer excess goofiness.

"[HanCinema's Film Review] "The Night of the Undead""
by HanCinema is licensed under a Creative Commons Attribution-Share Alike 3.0 Unported License.