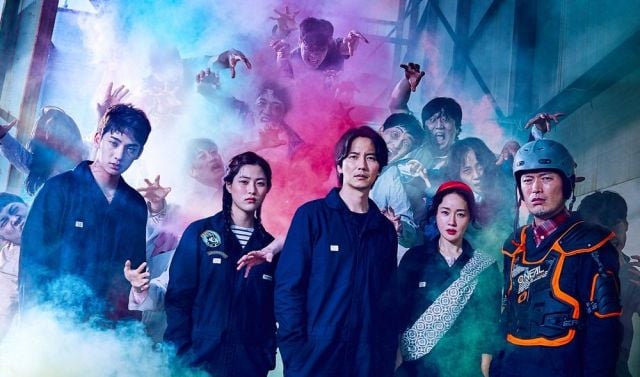 While the titular Zombie (played by Jung Ga-ram) appears almost immediately in "The Odd Family: Zombie On Sale" his presence initially has little traction. A single zombie is mostly harmless, and easily avoided by rural locals who assume he must be some kind of drug addict or something. The titular family is rather more ominous- they're a bunch of loud grifters who hustle out-of-towners for all their hard currency. When Min-geol (played by Kim Nam-gil) returns home the implication is obvious. Whoever Min-geol was trying to scam in the city caught on to his schemes.

From this very strange starting point "The Odd Family: Zombie On Sale" starts to spin around in circles. Literally, as twenty-something daughter Hae-geol (played by Lee Soo-kyung-I) is overjoyed to find that she can't accidentally kill a zombie through neglect. And so continues constant bickering between family members about what to do with their new pet zombie, inevitably settling on the plan that will allow them to make the most money.

For a really, really long time "The Odd Family: Zombie On Sale" is just a slow-motion train wreck. I mean that in the best possible way. More and more people find out about Zombie and rather than expressing the slightest bit of concern or suspicion about this inherently unsettling situation, they think of it in terms of personal profit. Even a visit to the local police precinct proves strangely inconclusive, as later scenes reveal little follow-up on what surely must have been a very interesting report.

When the disaster does finally happen I felt a mild sense of disappointment. Note that none of the characters are really all that sympathetic. The main ironic joke behind Nam-joo (played by Uhm Ji-won) is that she's heavily pregnant yet aggressively surly in a way that even makes her close family members bristle. Everyone gets moments like that, even if they still love each other, I guess. So I wasn't totally sure how to square the family's transformation from the cause of the zombie outbreak to, apparently, the only possible solution.

Zombie himself is an oddly relatable character through and through. Jung Ga-ram really gives the role his all. Playing a zombie in a zombie movie is the platonic definition of a role that doesn't require any actual acting talent. Yet we can clearly see the pain in his eyes as Zombie struggle to decide when to bite, and when not to bite. His below average intelligence in the matter is eventually forced through the means of simple shiny visual aids.

About the best endorsement (or condemnation) I can offer of "The Odd Family: Zombie On Sale" is that all the scenes I describe come off as exactly as disjointed and bizarre in context as they do in this mostly out of context review. Director Lee Min-jae-I picks a really weird gimmick and sticks with it. Even the constant visual references to a an upcoming fireworks festival get an unexpected and mostly incompetently handled payoff. By that point, we could hardly ask for anything less.