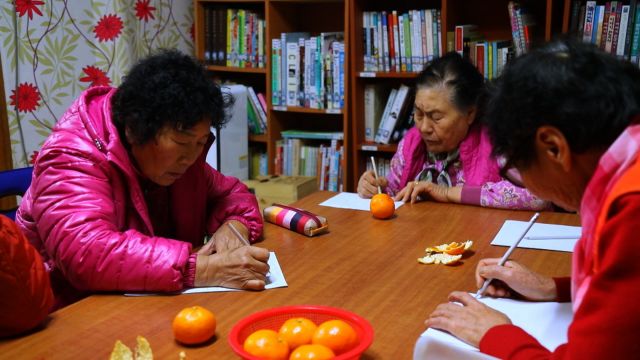 In the rural southwestern part of Korea some old women do household chores day in and day out. They clean up their modest homes, shovel out the snow, and manage their farming plots. It is admittedly preposterous how old women over the age of eighty insist on continuing to farm when they don't really have to. But then, the poets of "The Poem, My Old Mother" are creatures of habit, and that's what their poetry is about. Chores, mostly.

Don't get me wrong there's some fairly glorious functionalism at work here. I particularly liked the anecdote where one grandmother explains how she put a burial plot next to where she farms to make sure that she would regularly visit it. Even though "The Poem, My Old Mother" bills itself in part on criticism of patriarchy (until relatively recently these women were illiterate because they weren't allowed to go to school as children), the documentary is primarily about acceptance of past, present, and future rather than change.

I'm thinking of another anecdote, about a son who died, and musing that if not for that accident he would now be old as his father when he died. This information is presented in such a glib matter of fact way as to come off like morbid humor. In actuality, this is all just stuff that happened. There's no sense of resentment, just a passive notion of acceptance that sooner or later everything comes to an end which is why it's best to focus on the now.

The life philosophy of the grandmothers and the way its reflected in their poetry ends up being far more interesting than the main thrust of the documentary. "The Poem, My Old Mother" is a pretty standard healing movie. The idea is to be inspiring. These old women used to be illiterate and now they're poets. How cute and wonderful. Let's take a look through their daily lives and see what it's like to be an old woman poet.

The irony in that is the grandmothers themselves seem fine. If they were particularly miserable before becoming literate, no suggestion of this is presented on-screen. The implication presented from the very first piece of spoken poetry is that they've been living in this sense of vaguely reflective environmental consciousness their whole lives. They just didn't have any way to express it until they started learning about poetry.

The real intrigue here isn't what the grandmothers learn, but what we can learn from the grandmothers. I rather liked a late scene where we see them in front of a mural, with professional caricatures of the grandmothers mixed in with the grandmothers' own work. Comparing the real grandmothers to the cartoon ones is illuminating. The cartoon versions are a lot more smiley, but we've seen enough of them at this point to tell when the grandmothers are feeling a sense of inner contentment even if they don't explicitly say so. Really, they're just grandmothers who like to hang out and have fun. The best kind, really.

"The Poem, My Old Mother" is directed by Lee Jongeun, and narrated by Choi Soo-young

"[HanCinema's Film Review] "The Poem, My Old Mother""
by HanCinema is licensed under a Creative Commons Attribution-Share Alike 3.0 Unported License.