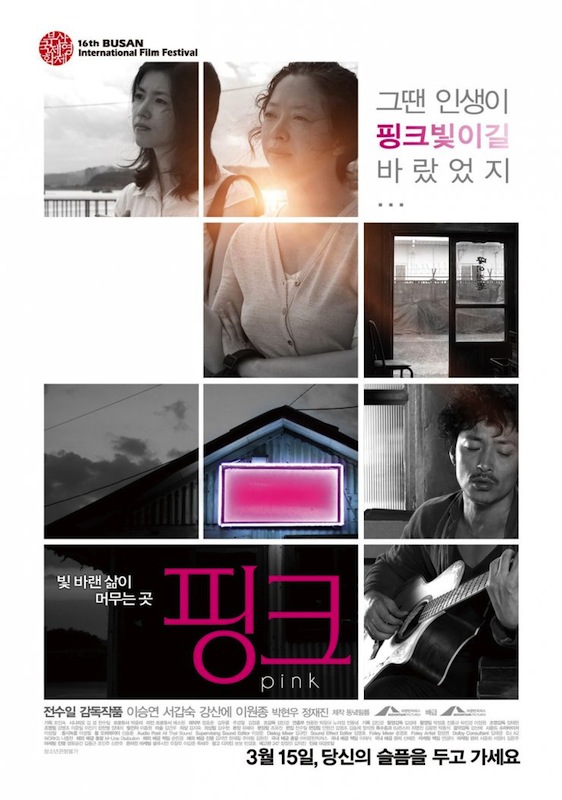 With its intriguing naturalistic style and strong psychological veneer, Jeon Soo-il's "Pink" is art-house film of note. The film made its world debut at the 16th Busan International Film festival and stars Lee Seung-yeon-I as the troubled and traumatised young woman Soo-jin. It's what one would consider a women's film that follows this young woman journey's as she moves to overcome her disturbing past in this forgotten, and soon to be demolished, little river-side town.

Soo-jin arrives in a shabby town to work at a hole-in-the-wall bar run by Ok-ryeon (Seo Kab-sook), an elderly woman who lives with her mentally challenged son Sang-gook (Park Hyun-woo). Ok-ryeon is a peculiar character herself who, when she's not protesting the re-development plans of a big corporation, runs this tiny bar-outside of which hangs a broken pink neon sign. The sign, for her, represents the desire for happiness in her life, a goal that seems to continue to elude her grasp in her monotonous and drab daily life. Her son is an apparent mute, a mentally handicapped high school boy who often refuses to go to school and engages in bizarre and illogical acts and personally understood rituals. He, for example, places chicken eggs in an abandoned refrigerator, hoping that they will hatch into one of many seagulls that swam around the riverbank outside their dilapidated dwelling.

The film makes use of a naturalistic camera style as static camera shots allow the cast to wonder in and out of frame without the invasive compulsion to follow them. Framing is perhaps the films biggest creative dimension as character's become trapped within Jeon Soo-il's fascinating and compelling mise-en-scene. These frames-within-frames, as it were, are beautifully composed and hold our gaze and we try to understand the ghosts that are haunting this broken little family. Jeon Soo-il often holds his shots for extend periods of time, allowing viewers time to question and reflect on the calm and troubled nature of his character's lives. These long-takes subtly shake and bob, but always hold their position as events unfold within and beyond them. It's an alluring quality that reinforces the film's major theme of male dominance and the power of patriarchy.

Soo-jin aloof persona is given a bit of clarity later in the film when she starts to see images of her absent father. His haunting and abusive presences is mirrored in the film's use of framing, as the omnipotent gaze of Sool-il's framing displaces and subverts the power the spectator has over events. This notion of the 'absent father' can also help to understand the boy's mental instability, as without a dominant male-figure in his life he is left rudderless and completely alienating from the social world. His mother's actions to protest against the city's plan to renovated the district also signifies the film's devotion to issues of power, or perhaps rather the misuse of that power.

While Soo-jin wonders around she encounters a man whom she is unable to really interact with, she seems not ready or ill-prepared to engage him while she is still haunted by the scares her father has left on her. Between Soo-jin's father, the boy, and this mystery guitar-playing man, there is strong argument for their combined condensation as these symbolic male entities seem to suggest that each is part of a greater whole Soo-jin is attempting to resolve. Similarly, the relationship between Soo-jin and Ok-ryeon is uncanny, and some may state that the two are actually one and the same, or at least embody the same struggles towards liberation. The two women are both 'battling' male power in some form or another, and there are many scenes that literally substitutes the one for the other. For example, in one scene Ok-ryeon is frame in a medium shot smoking a cigarette. Soo-jin enters which prompts Ok-ryeon to leave the scene, then Soo-jin proceeds to occupy that very same 'space' and role, finding herself frame in exactly the same light as Ok-ryeon that proceeded her (there are also a few other narrative happenings that hints to this argument).  This doubling, this substitution persists throughout the film and it is a fascinating point to keep you eye on.

"Pink" is a relatively short film, just ninety-seven minutes in fact, but it one of those Korean films that will remain with you. Some have criticised it as being a little too artsy for their liking, and while I don't disagree with the film's degree of artfulness I think this should not be enough to discourage viewers from experiencing this stunning and complex personal journey towards personal salvation and hope.