[HanCinema's Film Review] "The Princess and the Matchmaker" 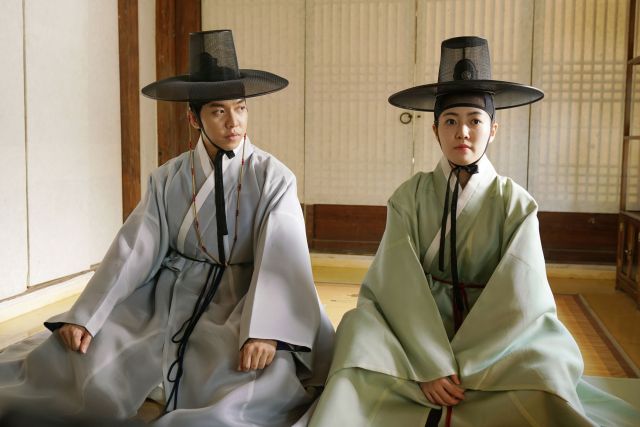 Deep into his reign, King Yeongjo (played by Kim Sang-kyung) faces a serious crisis. There's no rain, which means a bad harvest, which mean food shortages, which means bad times for everyone in Joseon. There's only one possible solution- marry off the homely Princess Song-hwa (played by Shim Eun-kyung) to someone with a particularly well correlated marital horoscape. It falls to Do-yoon (played by Lee Seung-gi), a prodigy horoscope technician, to find a match that will maximize the approval of the heavens and bring about the much needed rain.

The premise of "The Princess and the Matchmaker" is absurd. Even in context the mechanics of the marital horoscopes never make very much sense. When Do-yoon first meets his sidekick, Gae-hee (played by Jo Bok-rae), he arrests the moustached man for the crime of intentionally designing inaccurate horoscopes. The distinction between accurate and inaccurate horoscopes seems rather technical, considering how Song-hwa's four marital candidates each have an obvious glaring flaw that runs counter to their high compatability scores.

Then again, modern matchmaking methods, which utilize algorithms and quizzes based on other equally random information, are no less arbitrary. So think about "The Princess and the Matchmaker" less in terms of the technical specifics and more in terms of what's going on emotionally. Song-hwa is a lonely young woman who was separated from her mother at a young age once her royal pedigree was discovered. While King Yeongjo sympathizes with Song-hwa, as a non-legitimate princess, she's normally just not that important.

So it's with terror and joy that Song-hwa gets involved with the journey to find her future husband. Also there are jokes, usually based around the personality clash between Do-yoon and Song-hwa, even as they are both striving for the best possible outcome for very different reasons. Observe how much of the set-up is just Do-yoon trying to convince Song-hwa, however inadvertently, that she needs to be involved in the process firsthand.

There are also muddled story elements regarding the conspiracy that's trying to use Song-hwa's imminent marriage for political gain. Oddly enough I had more trouble understanding the conspiracy than I did the horoscopes. For most of the movie the conspiracy has very little to do with Do-yoon or Song-hwa directly, so their presence is very abstract, existing mostly for the sake of setting up the climax. Besides that, the explicit stated goal of using Song-hwa's marriage to provoke rainy weather is ridiculous enough that subverting this process does not come off as inherently wrong.

But if you interpret "The Princess and the Matchmaker" literally, then you're missing the point. This is a love story. We want Song-hwa to find love because we see that she is a kind person who deserves it. The exact means by which this is accomplished doesn't matter. Consider how the very flaws in the horoscope process and the grand conspiracy are what allow Song-hwa to find love. After all, what you want in a partner is someone whose heart is in the best place even in the worst of times. Because in the best of times, when there's plenty of rain, who cares?

"[HanCinema's Film Review] "The Princess and the Matchmaker""
by HanCinema is licensed under a Creative Commons Attribution-Share Alike 3.0 Unported License.