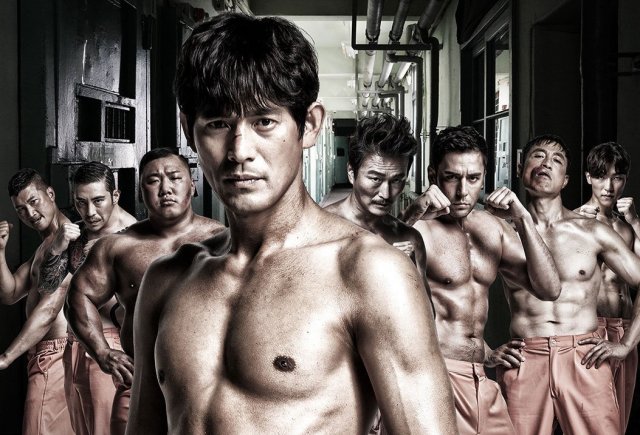 Director Kang Kil-yong is a legend when it comes to martial arts choreography, having worked on a ridiculously large number of famous South Korean films over the years. "The Prisoner" is his first attempt leading a movie production as director though, and the results are about what you'd expect. The acting, the script, and the set design is all pretty cheap and even cheesy. But those fight scenes! With very little to work with, Kang Kil-yong pulls off some outrageously kinetic hand-to-hand fisticuff duels.

Seven of them, to be exact. See, the backdrop of "The Prisoner" is this big jailhouse tournament that has something to do with VR movies. Save for some moments of comic relief this is never really important. Ostensibly the more in-focus plot is of detective Se-do (played by Oh Ji-ho), who goes rogue and by apparent coincidence finds his archnemesis In-gwi (played by Jo Woon) to be one of his tournament rivals. Exposition regarding this relationship is slowly explained via flashback throughout the movie.

Oh Ji-ho's performance as the pained detective is, frankly speaking, not very good. In a weird way his lackluster performance here actually improves "The Nightmare" from earlier this year. In both movies Oh Ji-ho drifts about with a slightly bewildered expression on his face, lending a surreal feeling to his interpretation of the world around him. Such acting is brilliant for a movie that's deliberately ambiguous about known reality as we know it, but is rather less appropriate for a movie about violent prisoners punching each other really hard.

And boy, what they lack in acting chops, the eight principals in "The Prisoner" compensate for with sheer homoerotic musculature. They throw themselves into the roles here, knowing full well that a chance to work with director Kang Kil-yong to hone their physique and action screen presence is a once in a lifetime opportunity. The stage punches in "The Prisoner" are so good I found myself worrying about whether any of these guys managed to seriously hurt each other.

Somewhat counterintuitively the first round of the fighting tournament ends up being the strongest one, if only because we see the combatants at maximum variety. Jake (played by Julien Kang) is highly aggressive and speaks entirely in English swear words. Doo-man (played by Ha Je-yong) is so thoroughly built like a tank his fight is mainly about finding the right weak spot. Woo-ri (played by Seo In-gul) is very young, and Kwang-do (played by Wang Hwi) is very gangster.

All the actors effectively channel the personalities of their characters through their fighting styles, which is impressive given how little their needlessly complicated backstories have to actually do with the plot. "The Prisoner" is pure pulpy, punchy goodness that more than makes up for its many shortcomings with powerful enthusiasm and dedication to the core concept. At only eighty minutes of length, it's hard to feel like I was shortchanged in any way. I was promised the opportunity to watch a bunch of beefy men throwdown, and that's exactly what I got.