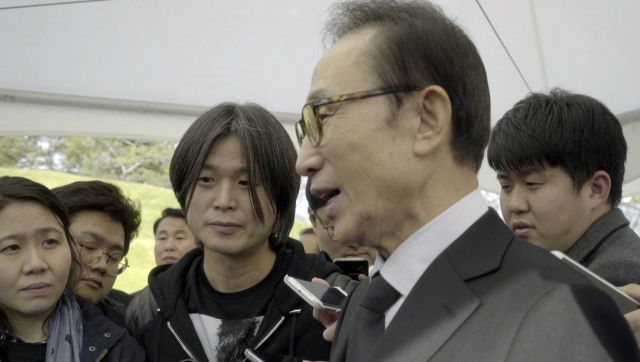 Nonghyup Bank is a major bank in South Korea, and has had a large number of powerful political allies over the previous two conservative political administrations. It was from this reputation that they were able to spearhead a big investment deal in Canada. But then something went wrong. The deal imploded, taking all the local investor money with it. Nonghyup Bank lost all of its money too, and the man running the operation skipped town.

That's where reporter Joo Jin-woo and director Choi Jin-seong come in. They go off to Canada to try and piece together what happened with the deal. And most of what they find is just a whole lot of suspicious circumstances. No one on the Canadian office payroll has any kind of traceable identity. They have names and ID numbers, and that's about it. The main lawyer Joo Jin-woo is able to find lives in a messy, cheap house with no air conditioning- almost as if she's expecting to move out of the country at a moment's notice.

And, well, I'll just have to level with you. "The Reservoir Game" is an insanely dense investigative documentary, the full specifics of which I can't really do justice to in this review. The main gist of it is that Joo Jin-woo has a source, his own deep throat, who explains in exact detail how the scam worked. The end goal was never any actual legitimate business dealing, but just a way to make a large amount of money disappear so as to set up a slush fund in the Cayman Islands for Lee Myung-bak and his allies.

Any attempt Joo Jin-woo makes to investigate deep throat's story either results in answers that are consistent with his explanations, or suspiciously obfuscatory on the most basic questions. At one point Joo Jin-woo gets on the phone with a cop who is supposed to be investigating the fraud. As it becomes clear that Joo Jin-woo has some information that the cop does not, Joo Jin-woo offers to come over and share what he knows. The offer is rebuffed- after all, how important can the case be if Nonghyup Bank itself is not interested in prosecuting?

Mind, the more complete interviews give away so much by accident it's easy to see why so many are tight-lipped. One Saenuri Party representative openly admits to facilitating huge money hand-offs for dubious projects, apparently not realizing that the behavior he is describing sounds shady at best and illegal at worst. Then there's the clips from one of Lee Myung-bak's television debates, where a fellow Saenuri Party leader openly challenges him to explain his participation in such pointless unprofitable deals.

The kicker? That Saenuri Party leader was Park Geun-hye. Lee Myung-bak was doing this stuff even before he became president- and upon gaining ultimate political power herself with the support of Lee Myung-bak's wing of the party, Park Geun-hye lost interest in investigating these deals. "The Reservoir Game" is a demand for better answers about just exactly what happened. Hopefully we get them.

"The Reservoir Game" is directed by Choi Jin-seong and features Joo Jin-woo.