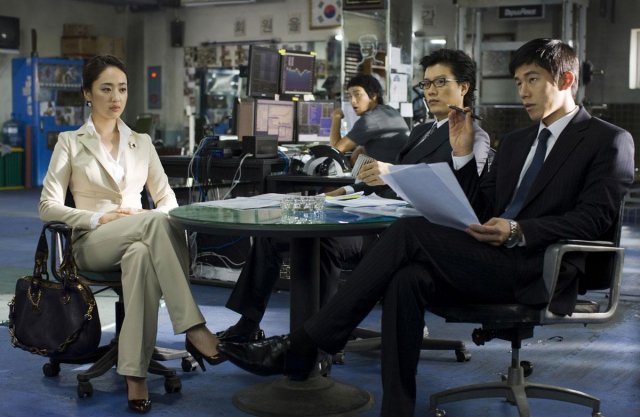 The literal Korean title of "The Scam" more accurately translates as operation, or strategy. The distinction in nuance is a critical one, as "The Scam" is a very detached film largely lacking a clear moral compass. Which is especially weird, as the movie directly deals with ethically fraught social problems. The way leading man Hyeon-soo (played by Park Yong-ha) just sort of flippantly ponders killing himself before going nah, I'll just try to cook up a stock market scheme instead, has aged particularly darkly in the wake of Park Yong-ha's real life suicide a year after the movie's release.

For a sense of perspective, the whole notion of South Korea having a very serious suicide problem wasn't really a thing when "The Scam" was being filmed, although the idea was rapidly gaining credibility by the time the movie finally came out. A lot of the ideas presented in the movie are like that. "The Scam" is the epitome of overly optimistic South Korean thinking in the aughts, when people had faith problems would work themselves out without really stopping to consider the systemic issues.

Observe one scene where Hyeon-soo admits, via self-narration, that kind of the entire premise of stock-broking is that he's robbing people who don't know any better. Brief moments of introspection like this are largely ignored as the movie muddles on for a surprisingly long time without a clear villain. Oh sure, Jong-goo (played by Park Hee-soon) is a particularly nasty gangster turned quasi-respectable businessman. But Hyeon-soo is rather underconcerned by Jong-goo's questionable morality until we get to a scene of gratuitous misogyny where Jong-goo isn't even the aggressor.

The entire climactic arc of "The Scam" is highly dubious, as we're expected to see Seo-yeon (played by Kim Min-jung) as fundamentally sympathetic. This woman is first introduced to us as someone who is good at helping rich people avoid paying their taxes. There is the very odd implication that Jong-goo and his goons are bad people, not because they're thieves, but because they're vulgar and not especially smart.

Hyeon-soo, by contrast, is aspirational. He's the guy we all wish we could be, smart enough to teach himself how to win the big bucks at the stock market. I call him an artifact of the aughts although honestly, there's not much difference between Hyeon-soo's type back then and his modern-day equivalents who are convinced they can strike it rich via cryptocurrency. I wish I was joking about that. It's a cultural trend that's genuinely very depressing.

And that's the issue of "The Scam" writ large. The movie feels like it should be depressing. It feels like it should be a commentary on the grotesque aspects of the South Korean social system that even make the premise possible. But it's not. "The Scam" is just a heist movie wrapped up in convoluted stock market lingo. The project is utterly lacking in a sorely needed sense of irony, and instead just wraps the whole story up all too neatly with unwarranted faith in South Korea's unseen political system.