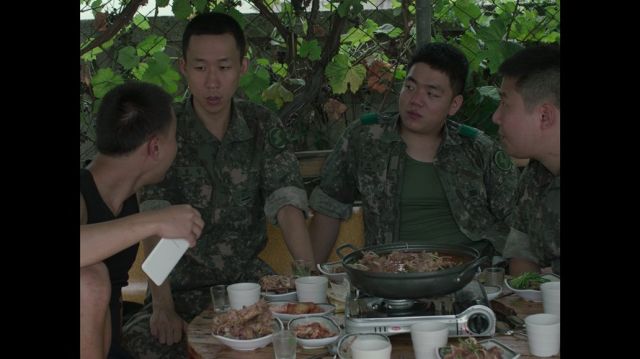 Joo-yong (played by Lee Ga-sub) is doing his military service and like most of his countrymen, not particularly enjoying the project. But Joo-yong's predicament is particularly bad- he and most of the other members of his platoon suffer from chronic bullying. An official complaint prompting investigation of the matter only serves to intensify the cold environment of harassment. It is from this vantage point that Joo-yong learns from whence "The Seeds of Violence" come.

The thematic arc of "The Seeds of Violence" is pretty simple. Violence is beget, not by sadism, obsession, or even hatred. No, what inspires the people in Joo-yong's life to try and solve their problems with violence is mere incompetence. You ask somebody to do something, and they don't do it, so you assume they're acting the way they are out of disrespect. The idea that you may be giving them an impossible task, or that they have a legitimate disagreement, well, those notions never enter the mind of a bully.

And all this works to beget a cycle- less a cycle of violence as a cycle of fumbling awkward incompetence. Joo-yong eventually gives up trying to actually solve any of his problems, instead coming up with increasingly elaborate ways to run away from them. The results are never tragic so much as they are pathetic. Hence why Joo-yong too eventually succumbs to the crutch of violence as a solution, not because he expects it to work, but because violent acts at least let Joo-yong feel like he's doing something.

Ironically, considering that the title of the movie is "The Seeds of Violence", the focus is much more on the mental element. Most of the more significant acts of violence end up taking place off-screen, and this really works to accentuate the polite lie of how of course no one had any idea abuse was going on. Everyone always knows something is up, they just choose to ignore it. Joo-yong's discovery that this dynamic exists not just in the military, but his own family, only affirms the sheer universality of the idea.

It's pretty depressing stuff. My first instinct to most of the more awkward scenes in "The Seeds of Violence" was just to sort of tilt my head away from the movie, as if I could somehow escape from the more unsettling implications by making it harder for me to physically see them. Seeing Joo-yong and all the other various victims similarly use body language to try and pretend like they were not horribly uncomfortable, well, geez, it's kind of like looking into a mirror.

And don't expect anything approaching an answer to this problem either. "The Seeds of Violence" is always about questions that are fundamentally unresolvable, which as narrative form, is pretty inherently unsatisfactory. But the film more than makes up for that shortcoming with powerful thematic depth and excellent performances from the cast. It's easy to see how "The Seeds of Violence" won the Grand Prize at the Jeonju International Film Festival this year- as downer movies go, it's definitely worth the effort.

"The Seeds of Violence" is directed by Lim Taegue and features Lee Ga-sub, Jung Jae-yoon, Kim Soy and Park Sung-il.

"[HanCinema's Film Review] "The Seeds of Violence""
by HanCinema is licensed under a Creative Commons Attribution-Share Alike 3.0 Unported License.