[HanCinema's Film Review] "The Showdown": A Loveless Triangle of Blood and Blades 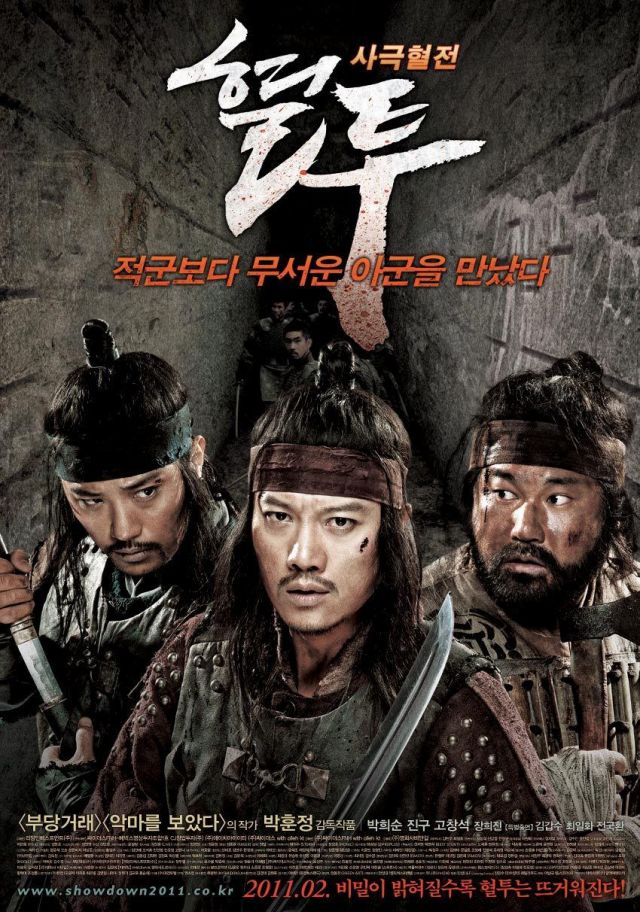 After last week's review of Kim Han-min's "Arrow, The Ultimate Weapon" I felt a sudden craving for some more historical action. I came across Park Hoon-jung's "The Showdown" and thought it would be just the sort of flick that would satisfy my recent obsession with bows and swords. The film further intrigued me when I saw that Park also wrote the screenplay for "The Unjust" and "I Saw the Devil", two other great films from 2010. While not as flashy or adrenaline packed as "Arrow, The Ultimate Weapon", "The Showdown" has a darker taint that is psychologically driven and framed.

Three survived the snowy and bloody battle between the Korean Jo-seon army and their encounter with the Chinese Ching forces. Among them is the fool Doo-soo (Ko Chang-seok), the Jo-seon general Heon-myeong (Park Hee-soon), and his old friend Do-yeong (Jin Goo). Snow gulfs their bodies as the calm after battle settles upon them, but death has not yet come and the struggle to survive brings them all to a remote outpost battered, bruised, and all with darker plans for their survival.

With the snowstorm raging around them the three survivors make their plans to get home. The family that awaits him back home drives Doo-soo as well as the pent-up frustration his has towards the Jo-seon aristocrats. Heon-myeong is struggling with his own guilt as he was forced to betray his best friend and his family; a burden released in whisper to Do-yeong in what he thought was their final moments in the snow. Do-yeong has his own agenda but when he hears of his friend's betrayal life in the cabin becomes a bloody struggle to survive and a prison to lay all ones' cards on the table. All the while the Ching forces are moving in on the cabin to eradicate the last of Jo-seon dogs.

I went into "The Showdown" will little knowledge of what I was about to witness. It did not have the swift or beautiful swordplay I had hoped for, or the heroic sense of self-sacrifice we saw in "Arrow, The Ultimate Weapon". Instead, what I go was the darker side of the blade, the one not polished or shining but rusted and warped by wear, blood, and secrets. That all might sound a bit dramatic, and it is, but I enjoyed the film's melancholic tone as well as its isolated pessimism and sense of foreboding. Paired with that is the claustrophobic framing of events, be in the cabin itself or the expanse of the countryside, there is an unavoidable tightness to the action that balms you with a sense of doom and hints at the inescapable nature of it all. Three men survived the battle but the triangular conflict that follows will leave little room for the hopes and dreams of the weak.