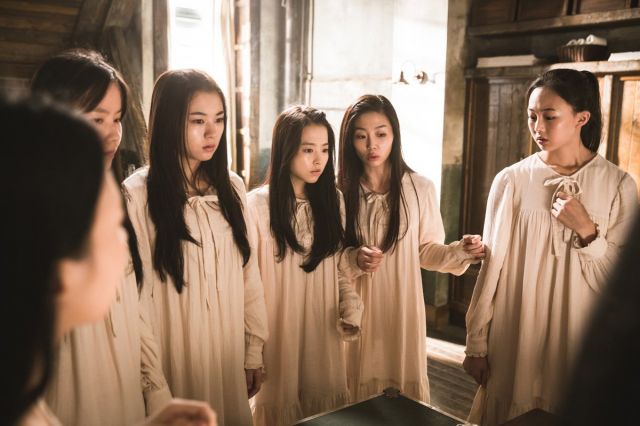 The year is 1938, and Joo-ran (played by Park Bo-young) is a young woman who's sent off to boarding school, mostly to avoid being too much of an inconvenience to a restructured family that's decided to move to Japan. For the most part Joo-ran's adjustments to the new environment are nothing out of the ordinary. There's a bullying clique, a new friend by the name of Yeon-deok (played by Park So-dam), a curricular obsession with long jumping, and freaky hallucinations involving missing students covered in nightmarish gook. At least, Joo-ran is hoping these are just hallucinations.

Don't worry too much about the scarier elements- "The Silenced" is never really a particularly severe horror film. The imagery is at times surprising but it's never so gruesome as to provoke a jump scare, or make you want to face away from the screen. By and large the emphasis is on what exactly the headmaster (played by Uhm Ji-won) is expecting the students to actually do. There's not much education or even serious discipline except when it comes to following direct orders.

The problem with a movie that puts all of the emphasis on the mystery is that when we take away the mystery, there's not really much of a movie left over. I'm hesitant to even describe a lot of what actually happens in the introductory portions, because most of what happens early on in the movie is a clue for what ultimately unveils the mystery. But I'm afraid that described straight out in text, the plot twist will probably come off as really, really obvious.

The cast, at least, is pretty good. Really, Park Bo-young is great in most of what she's in, which is why it's a little disappointing that we never really get into her backstory here. Well-to-do Korean families doing their best to blend in with the Japanese was a very real occurence during the Occupation- contrary to popular belief, the Japanese were actually the least racist of the imperial powers, and considered their subjugated peoples full Japanese citizens. When it was convenient anyway.

There might have been some interesting social commentary in there, but alas, "The Silenced" is only really set during the Occupation at all because that's the setting where the plot twist would make the most logical sense. Even the period costumes are fairly subdued- justifiable, considering that boarding schools aren't known for their open-minded dress codes. Only the camerawork comes off particularly well, and the location shooting was also well done. Such lush greenery...

...A pity there wasn't more of a point to it. I don't want to be too harsh on "The Silenced". It's a very well-made, well-constructed, well-written period mystery. But for all these virtues the film suffers mainly from a lack of real relevancy. By the end all we've really learned is that schoolgirls are capable of forming serious emotional social bonds and that the Japanese Empire was bad. Perhaps that's enough for the casual filmgoer, or conceivably fans of Park Bo-young. At best, though, that's still fairly faint praise.