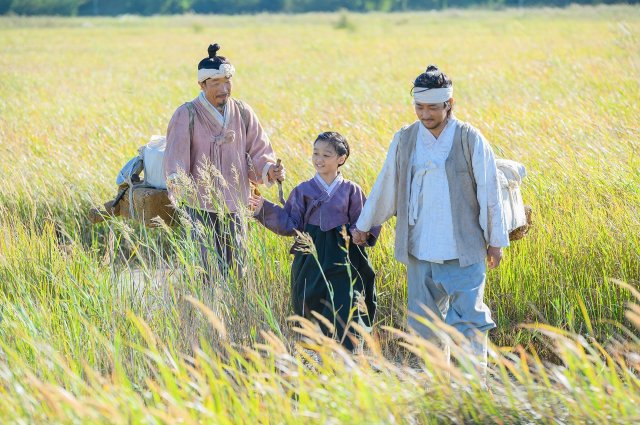 In eighteenth century Joseon we see singer Hak-gyoo (played by Lee Bong-geun), his wife Gan-nan (played by Lee Yu-ri) and their daughter Cheong-i (played by Kim Ha-yeon-I) in a constant state of familial bliss. Even a scene as simple as a stroll through a meadow takes on powerful romantic connotations. There's also a strong sense of surreptitiousness in the overall family dynamic, as is most obviously observed when Cheong-i cheekily signals to the viewer that she knows more about how her parents relate to each other than she lets on.

So it is that even as "The Singer" drifts into a more dramatic storyline centered around injustice and lost love, the film radiates with optimism. The three lead characters learn to cherish not what they had, or what they wish to have, but rather what they have right this minute. Hak-gyoo's extended odyssey as a traveling musician very obviously draws from his own personal experiences, inspiring the people around him just as he inspires himself with powerful intonation about the innately emotional journey of life.

While the content of "The Singer" is appropriate for children it is not particularly a children's movie. The world of the the movie is one filled with class conflict, criminal abuse, and worst of all, authority figures who can't be trusted. Yet even as writer/director Cho Jung-rae is bluntly honest about the seemingly unsolvable problems of the world the characters live, he never allows them to wallow in misery. They dare to hope and dream for miracles and are more than willing to settle for minor ones.

The overall dramatic thrust of "The Singer" almost perfectly encapsulates the narrative structure of traditional pansori music in its own context. Indeed, this is the first time I've even mentioned the movie's main obvious selling point, precisely because the overall design feels shockingly naturalistic. As Hak-gyoo's life starts to incorporate pansori elements, we come to realize that this is looking at the process backwards. Pansori is cultural heritage precisely because it features so many relatable elements of everyday life.

A willingness to play with the proper script of pansori further emphasizes this. After all, pansori used to be the music of the people. It only makes sense that individual performers would alter the exact tone and plot points of pansori classics to better fit their own life experiences. Hak-gyoo uses pansori as his own spiritual coping mechanism as much as anything else, which helps him make sense of his own misfortunes and move forward.

This leads to a beautiful ending which at first glance apears to be an obnoxious cliché but in practice serves as a truly effective illustration of what pansori offers. Hak-gyoo earns his improbable salvation simply by believing hard enough in it, because of the undeniable sincerity in his words. Whatever hardship Hak-gyoo or his family may suffer, sincerity is their dignity. Even in a crumbling world, that's better than nothing, simultaneously the most, and unfortunately also the least, that art can do.